Mastering the Skies: The Dawn of Commercial Drones

Detecting abnormal forest temperatures. Coaching people as they exercise. Locating poachers. What’s the common denominator in these seemingly disparate tasks? In the not-so-distant future, they will all be accomplished by commercial drones.

Although the first airplane was invented 15 years before the first pilotless aircraft, unmanned aerial vehicles (UAVs) have greatly progressed in capabilities – debatably, even surpassing airplanes – and the commercial sector is eager to jump on the plethora of opportunities they provide.

In this article, I’m going to explain how commercial drones have evolved, how they will be utilized in the future and what challenges drone manufacturers and users will have to overcome.

The Evolution of Commercial Drones

The first pilotless winged aircraft – the Ruston Proctor Aerial Target – was built in 1916. It was radio-controlled, like a more archaic version of modern drones. 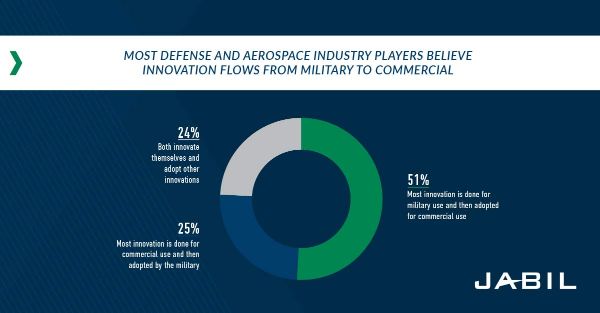 In Jabil’s Aerospace and Defense Manufacturing Trends survey, about 50% of respondents asserted that most innovation is done for military use and then adopted for commercial applications. In a way, this is true; after all, unmanned aircraft were first developed for combat in World War I. However, companies are increasingly perceiving the potential to leverage unmanned aircraft as a powerful business tool and competitive advantage.

Although drones were originally designed for defense applications, it will be the commercial sector that supercharges this technology in the upcoming years. Following the DoD’s recent shift capitalize on the commercial sector’s rapid technology development, defense applications will have a large capability pool to leverage. Download the full survey report.

Any future evolutions of drones will center on managing and enhancing the elements of the iron triangle: speed, endurance (a.k.a. loiter time) and payloads. This triangle must balance the weight of the aerial systems of the drone and the weight of the battery and add-on equipment such as cameras and sensors, against the time that the battery will be able to keep that aircraft aloft. But the utilization of additive manufacturing has made it much easier to craft lighter, more cost-effective and more aerodynamically efficient designs.

Additive manufacturing will allow drone design teams to capitalize on parts with complex geometries more easily and efficiently than is possible with traditional manufacturing methods. Balancing the iron triangle is further enhanced by new materials that are available through additive manufacturing to reduce weight while protecting performance by maintaining strength and stiffness.

The advent and incorporation of cutting-edge technologies will also enhance drone performance. For instance, the network slicing enabled by the long-anticipated 5G will allow companies to curate the services they need to match the needed abilities of the UAVs. Other technologies, such as artificial intelligence, advanced battery management, and conformal power sources will be especially useful to specific applications.

It’s no wonder that unmanned aerial vehicles have spiked in popularity; because they operate on electricity, they require no gas and emit less carbon, thus providing a more eco-friendly alternative to airplanes and delivery trucks. They also contribute to time and cost reduction in most applications and can save man-hours, costs and perform hazardous or unreachable tasks.

Here are some of the specific industries and applications commercial drones are being utilized for:

On October 18, 2019, Susie Sensmeier received a door-to-door drone delivery to her home in Christiansburg, Virginia. The Alphabet-owned company Wings was one of the first companies to receive Federal Aviation Authority approval for this drone service; however, many more retailers are striving to achieve permission to launch this service.

Delivery has never been more instantaneous. Consumers can browse a store online, select the product they want, and a few clicks and days – or hours – later, it will be sitting on their doorstep. We’ve seen this ability grow and evolve significantly in the past few years; FedEx pioneered overnight delivery, Amazon exploded with its guarantee of two-day delivery, apps like GrubHub bring items to people’s door within the hour. Companies are mastering roads, but there is one avenue of delivery that businesses are still seeking to master: the sky.

In 2020, we’ll send more than 100 billion parcels — and that number could double by 2030, according to a McKinsey report. Another McKinsey report states that 15 years ago, the ratio of mail to packages was 13:1, but in another five years, the number of packages being delivered will be equal to the amount of mail.

In dense cities like New York, an overwhelming percentage of all goods is delivered by truck. Every day, approximately 25,000 delivery trucks and commercial vehicles move into and around Manhattan. Now, we see a variety of companies pushing for drone deliveries to alleviate traffic from constrained areas.

Drones are now conducting some inspections that have traditionally involved dangerous or very specially trained individuals to be able to perform.

This allows businesses and governments to remove employees from dangerous situations. Companies can also increase the number of inspections by removing the cost and time it would take to train individuals and send out expensive assets. For example, an oil and gas company would typically spend around $2,500 to send a helicopter and team to conduct a pipeline inspection. A drone can survey 105 miles of pipeline a day, on par with a helicopter crew but at a significantly lower cost. With UAVs, inspections can be more thorough, frequent and considerably less expensive.

This could also be incredibly valuable in the field of agriculture. Farmers can hire drones to evaluate the health of their crops and soil. At current altitude restrictions, they could inspect up to 1,000 acres of farmland per day, completing surveys more quickly and accurately than planes or satellites, according to a report by Goldman Sachs. The report went on to state that if drone regulators increase the maximum flight height by just 40%, it would double farmers’ daily coverage. This can save farmers cost, which leads to lower prices for consumers. In one case, a farmer prevented nearly $60,000 in lost revenue by detecting an aphid infestation early.

Artificial intelligence (AI) and machine learning (ML) will be especially useful – even vital – in this application. Companies are already leaning heavily on AI/ML to analyze the massive amounts of aerial information they receive; manual analysis simply isn’t scalable. It is also too error-prone. DroneDeploy reports that it is “leveraging the world’s largest drone data repository of almost 100 million aerial images to create software tools that automate site analysis through object identification and measurement. These solutions stem from actual data collected by customers implementing drones in the real world. One of the latest tools to leverage this data include automatic ground control point (GCP) processing, which was built using more than 150,000 images of GCP target.”

Commercial drones can significantly assist in the collection of various data, such as photos, maps and models. The ability to provide an elevated panoramic view will be highly valuable for several industries; for example, in construction, it can assess the stability of a structure.

This is another application where 5G will likely prove to be fundamentally useful. After all, 5G will not only be faster than current wireless, it will be 10 to 100 times faster. Whereas 4G has peak speeds of 50Mbps, 5G is expected to ascend to 20Gbps. In addition, 5G technology will reduce latency from 50ms to 1ms. It will spur leaps in the coverage, capacity and density of wireless networks. The high speeds of the next generation of wireless will allow drones to analyze and transmit information at unprecedented speeds.

That said, because 5G depends on very densely deployed small cells, it is not expected to replace 4G outside towns in the near future. This may prevent certain drone applications from taking advantage of 5G until wireless has further evolved.

Ever thinking outside the box, beyond using UAVs for photography and video, the Walt Disney Company has filed a patent to use drones at its Disneyland theme park. In its film “Tangled” (based on the story of Rapunzel), there is an iconic scene where thousands of floating lanterns are released into the sky. Disney wants to create this scene in real life, with the use of commercial drones.

In fact, Disney has already used drones for its holiday celebration, using 600 Intel drones to create a multi-colored light display. These drones were about the weight of a volleyball and contained Styrofoam housing with simple metal cages around the four props. At the bottom is the large, multi-colored LED light that provides the bright spectacle. Half of these drones were also used at Lady Gaga’s Superbowl halftime show.

But Disney isn’t the first to come up with this concept of using drones for display shows. For example, China first invented fireworks…and it may be the first country to outgrow them. To fight pollution, China has banned fireworks in more than 400 cities. However, the country has found an alternative solution. In 2018, Fortune magazine announced, “Drone swarms are the new fireworks in China.” At the China International Big Data Expo 2019, 526 lit drones formed 3D aerial patterns in the night sky, dazzling spectators and leaving experts to wonder what could be next for commercial drones. Holiday celebrations? Sport stadiums?

The Challenge: Regulation Creation and Compliance

The swift development of the drone industry has outpaced the growth of rules and systems to govern their use. Although this uncertainty drags at the speed of innovation and commercial adoption, regulatory clarity should unlock demand.

A primary concern that will guide drone regulations is ensuring the safety of airplanes. A traffic jam or will almost certainly have more devastating consequences in the sky than on the road. I can say with certainty that commercial drones will never be approved to fly near an airport.

Governing air traffic is one initiative that NASA is aiming to tackle. They are launching a multi-billion dollar initiative to develop a U.S. airspace management system that can safely coordinate both manned and unmanned flight.

Commercial drones are taking off…literally and metaphorically. Consumers will be able to order a product and within an hour, find it waiting on their front lawn. Construction workers will be able to assess the stability of a structure more quickly and effectively. Necessary inspections will be performed more frequently as cost slopes and safety rises. And as UAVs become outfitted with 5G, artificial intelligence and other emerging technologies, their capabilities and applications will increase beyond what we can imagine, creating a safer world, more efficient workforce and stronger economy.