Up until World War II (WWII), the defense industry relied on commercial technology innovation to adopt new advancements. Governments around the world examined what was on the market and how it could be adapted for military use.

Although the first powered aircraft was invented in 1903 by the Wright brothers, these planes made their initial appearance in war in 1911 by the Italians against the Turkish. But it wasn’t until a few years later that the use of aircraft became widespread. The process of adopting these technology innovations for military purposes, of course, isn’t as simple as it sounds.

“There was usually a careful process of trying [the aircraft] out in different scenarios, taking lessons from the operational experience or the wargaming experience, folding it back into the technology, and then, eventually, it became part of the fleet,” said Larrie D. Ferreiro, director of research at the Defense Acquisition University, in an interview with The German Marshall Fund of the United States. This systematic mindset is very similar to modern agile development, according to the interview.

While defense industry technology innovation may take much longer to find its place in the field, time-to-market is critical in gaining a military advantage (as with any other industry). The innovation flow, however, has shifted since WWII to focus from commercial portability to independent military research and development.

In Jabil’s Aerospace and Defense Manufacturing Trends report, 51 percent of OEMs said that most innovation is done for military use and then adopted for commercial use. Therefore, with the advent of technologies like artificial intelligence, augmented and virtual reality and the Internet of Things (IoT), we may not be too far from returning to our initial model. These technologies are moving at a pace far greater than the defense industry can keep up with, meaning that it may be in the industry’s best interest to adapt them for military rather than try to lead the innovation. Download the full survey report. 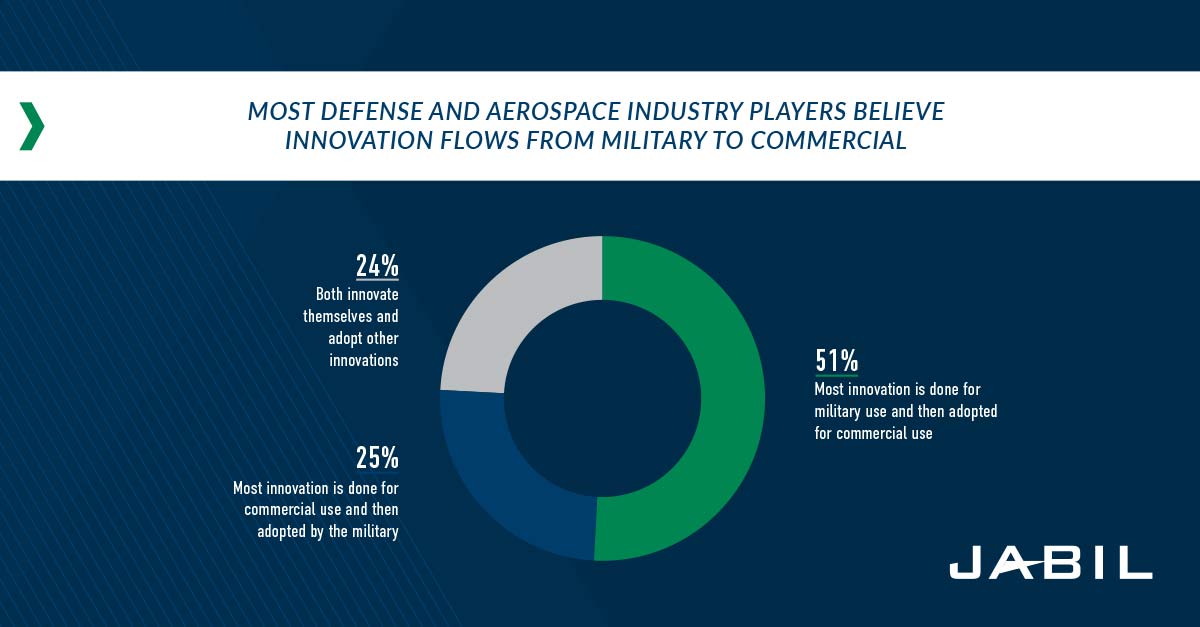 Still, with large budgets on hand, defense and aerospace OEMs are investing significantly in technology innovations like smart systems and artificial intelligence, connected devices, supply chain applications and additive manufacturing, according to the survey. In fact, 78 percent of participants said their company was investing in technology innovation over any other type (materials, process, user experience) over the next five years.

In Jabil’s 2018 Augmented and Virtual Reality Trends survey, participants listed military as the third industry to be most impacted by the technology, closely following healthcare and manufacturing. In fact, augmented and virtual reality (AR/VR) are perfect examples of technology that has made its way from commercial use to military. Gaming may be the ultimate association with AR/VR, but it’s an excellent fit for an industry that requires a lot of training and simulations.

With the growth of headsets and game-based technology, the defense industry can provide low-cost, but effective training and simulation programs. This way, governments can leverage the latest technology to build immersive, repetitive and flexible experience—such as flight or combat training—where it is needed, reducing overhead. It’s clear that AR/VR will serve the defense industry well in training purposes.

Beyond training opportunities, AR/VR can make on-field soldiers more effective as well. Through wearable glasses or headsets, data can be overlaid onto a battlefield, providing soldiers with mapping information, movement markers and more. Furthermore, when a piece of equipment malfunctions on the field, maintenance or repair instructions can be live-streamed from the headsets.

2. Big Data and the Internet of Things

In the defense industry, everything comes down to strategy—and you simply can’t build an effective strategy without information. The Internet of Things (IoT) is one of the technology innovations the industry can leverage, where split-second decisions could have dire consequences. As in other industries, the term is personalized for the industry, sometimes referred to as the Internet of Military Things or the Internet of Battlefield Things.

No matter what you call it, the opportunities are plentiful. Everything from jet engines, weapons, vehicles and soldiers (and more) could be a source of data. This data is essential to build a winning strategy that ensures all efforts more efficient, safe and controllable.

For example, the sensors embedded on a soldier’s suit, helmet and other equipment could capture biometric data, contextual information and even details on the soldier’s physical and mental state. Gathering all this data can increase the soldier’s chance of survival or lethality.

But how do you handle the data overload? Consider a jet engine that has more than 5,000 sensors, generating as much as 10 GB of data per second. When you multiply these data points from numerous others, how do you avoid getting lost in a forest of data?

Edge computing seems to be the solution to parsing through all the data as quickly as possible. Real-time insights are within reach when gathered, analyzed and delivered closer to the devices. And these insights can lead to better decisions. For instance, the U.S. Air Force has been able to save almost $1 million a week in tanker refueling costs via edge and cloud computing working with Dell, according to a FedTech article.

When we asked the Jabil survey participants about the technology innovations they would invest in over the next five years, smart systems and artificial intelligence (AI) topped the list. The development of AI is already accelerating in the military. In 2018, the U.S. Defense Advanced Research Projects Agency (DARPA) announced a $2 billion campaign to develop the next wave of AI technologies to create “more trusting, collaborative partnerships between human and machines.”

According to the announcement, DARPA is currently pursuing more than 20 programs to advance AI beyond machine learning techniques towards contextual reasoning capabilities. This third wave of technology innovation will explore new theories and applications that could make it possible for machines to adapt to changing situations.

As the data pool from connected devices grow in the defense industry, artificial intelligence will be vital to using that data effectively. It will also be the gateway toward autonomous systems like military drones and autonomous aircrafts.

It’s impossible to talk about technology innovation in the defense industry without mentioning additive manufacturing. While 3D printing has been a part of defense manufacturing for several years, the use of the technology is accelerating. Prototyping is still the most common use case, although other applications such as repair and maintenance, research and development, production parts, jigs, fixtures and tooling, and bridge production are growing quickly.

Technology Innovation in the Defense Industry is a Bumpy Road

Still, for all the technology innovation in the defense industry, there are numerous challenges. Forty-six percent of respondents in the Jabil survey said that integrating new technologies can be time-consuming and disruptive. Another 37 percent mentioned the difficulty of securing systems. 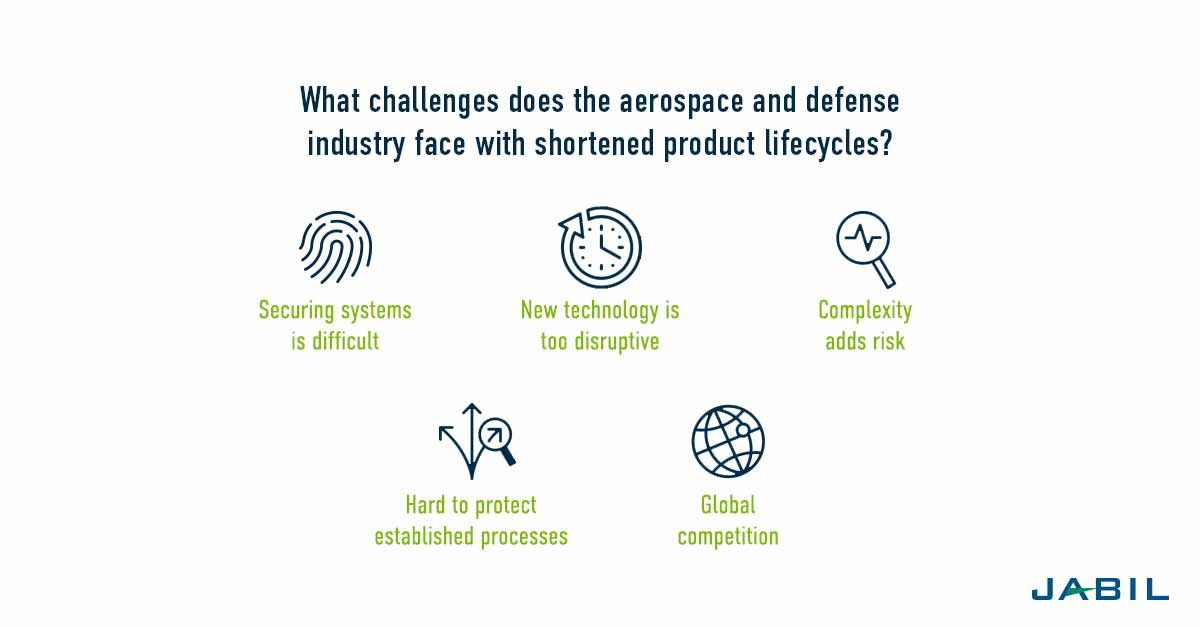 However, a deeper dive reveals that technology itself may not be the issue. When we asked participants about their greatest roadblock to technology innovation, only 26 percent responded with the immaturity of existing solutions. Nearly three-fourths highlighted the lack of leadership to transform their processes and mindsets. 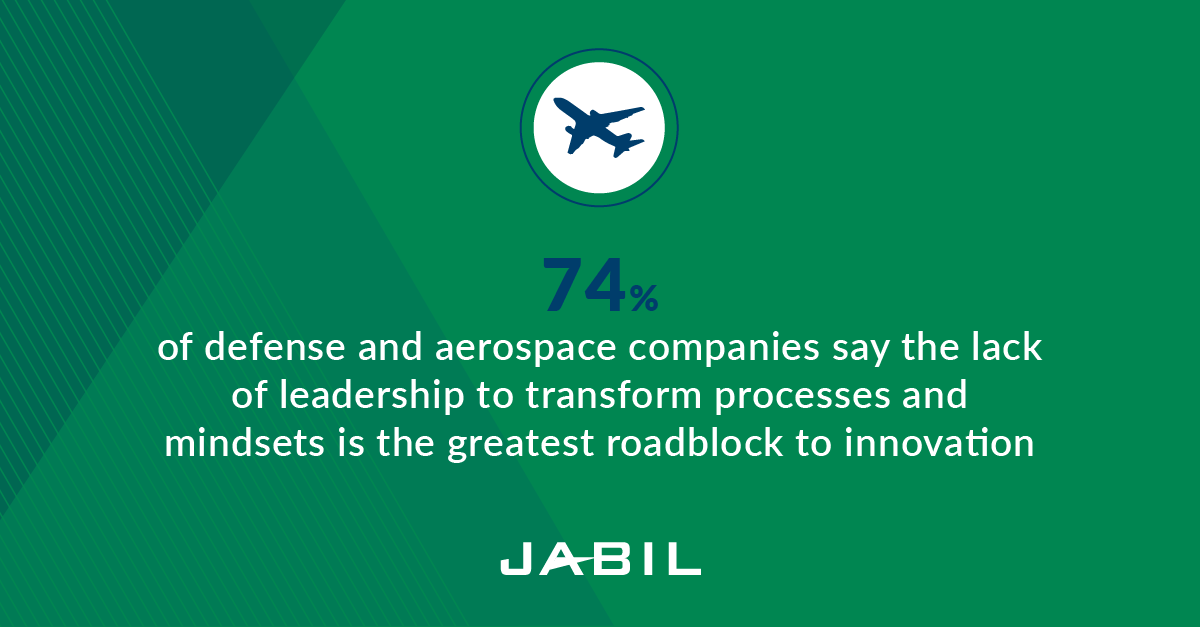 While defense industry players with 20,000 to 40,000 employees had the toughest time with existing technical solutions, 94 percent of companies with more than 100,000 employees said the lack of leadership was the direst obstacle to their innovation endeavors. Surprisingly, even 82 percent of those in the c-suite agreed that lack of leadership was a cultural roadblock to technology innovation.

Research from Deloitte highlights what high-performing companies focus on for their current and future competitiveness, including:

Simply put, high-performers should exercise flexibility and adaptability to transform their companies with changing market conditions. This mindset change starts at the top of the organization. Considering that 98 percent of Jabil survey respondents said that innovation was very important to their company’s ongoing business strategy, a culture of enabling innovation is essential for success.

The truth is, slow research and development efforts have never been a recipe for long-term success and the significant threats confronting the industry show why that’s even more true today, according to Strategy&. Commercial technology entrants can innovate rapidly with their large workforce and make accepting uncertainty a normalcy in this risk-averse industry.

Then how can you enable a culture of innovation within the defense industry? The key is to think like a startup, according to DefenseOne. Two of their recommendations stand out from the rest:

Those who do it right reap great benefits. According to the Jabil survey, companies see the following benefits from innovation:

The greatest roadblock to innovation within the defense industry may be lack of leadership, but manufacturing partners can be a stronghold to ensure you stay ahead of your industry.

Orville Wright once said, “No flying machine will ever fly from New York to Paris…[because] no known motor can run at the requisite speed for four days without stopping.” The high school dropout who closed his bicycle repair shop to create the first flying machine couldn’t wrap his mind around a 3,625-mile trip. But on May 21, 1927, Charles Lindbergh proved it was possible, taking off in Long Island, New York and landing in Paris, France. This illustrates an ongoing trend: aviation is constantly pushing the boundaries of what we perceive as possible. Whether innovation is developed within the defense industry first or adapted from commercial technologies, one thing is for sure. Anything is possible.