The Fast & the Frequency: How Fast is 5G? 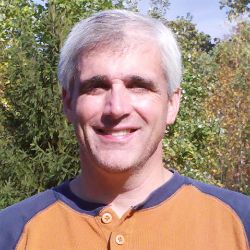 No one likes waiting. But there is something particularly frustrating about staring at a frozen progress bar or a spinning pinwheel on your smartphone as you wait for an app to load. As we've become dependent on mobile internet for our maps, messaging and weather updates, slow connection speeds can put a damper on our day — if not completely disrupt our routines. Those frustrations are leading many to ask: Is 5G the solution? And how fast is 5G? For many, it can't get here soon enough.

4G LTE changed the world, creating the app-centric ecosystem in which we now live. But to keep moving forward, we look to the next generation: the high-speed 5G connection.

Technology is finally catching up to 5G's promise of speeds that will far surpass the performance of previous generations. In a survey of 193 telecommunications stakeholders fielded by Jabil and SIS International Research in the fall of 2021 about the challenges and opportunities associated with 5G deployment, 65% of respondents said they expect 5G to be a superior technology that will dramatically transform telecommunications — up from 49% in 2018. Chipsets, algorithms and other wireless elements can now support the frequencies needed to reach the rapid speeds that newly released spectrum bands allow for.

Here's a primer on 5G speed, from megabits to millimeter wave.

The key driver for 5G speed is the availability of more spectrum, the radio frequencies over which wireless signals travel. This availability of spectrum, or lack therof, was a challenge that 32% of respondents in Jabil's recent 5G survey faced in deploying their networks. However, global communications agencies, including the FCC in the U.S., are quickly opening more radio frequencies to make room for 5G through auctions.

Think about spectrum as the wireless equivalent of real estate. In real estate, developers are looking for space to populate buildings, and the more availability there is, the more buildings they can put up. Similarly, in wireless, service providers are looking for more spectrum, so they have more space in which to channel data at faster speeds. By clearing more and more spectrum, communications agencies will give service providers they space they seek to provide 5G data.

Keeping with the real estate analogy, in 5G there are three "neighborhoods" in which spectrum is being allocated. What is typically referred to as high-band spectrum was the focus of many early auctions Since it is a very new, almost greenfield neighborhood, there is a vast amount of spectrum in which to put new data services.

The mid-band spectrum, which has been the target of more recent auctions, has a moderate amount of spectrum available, but there are quite a few existing "tenants," including satellite communications and some weather radar systems, that must be relocated in order to utilize this space. Finally, the low-band has the least amount spectrum available due to certain physical characteristics of this band. As one can imagine, the more spectrum available, as with high-band, the faster the data rates that can be channeled through that space.

However, in physics, there is always a tradeoff. It turns out that the low-band is better for widespread wireless coverage. This is because the radio waves that carry the wireless signals can propagate, or travel, much longer distances in this band than in other bands.

That said, any kind of 5G is better than no 5G. Low-band spectrum provides a good starting point for coverage. One approach to 5G is "crawl, walk, run" — start slow, then work your way up to faster speeds. T-Mobile, for example, has done this by launching low-band 5G across nearly the entire U.S. early, prior to their build-out of higher bands that will deliver the faster speed promised by 5G.

So, exactly how fast is 5G speed? The short answer: It depends.

As mentioned above, the newly identified 5G spectrum is available in three bands, which provide different tiers of 5G speeds that range from 4G-like to game-changing.

The first tier is the low band. This spectrum's frequency is less than 1 GHz, usually between 600 and 900 MHz. It has the most widespread coverage of any 5G band, but it's only slightly faster than 4G in most cases. Low-band 5G can reach speeds of 50 to 250 Mbps, with 4G typically clocking in at a little under 30 Mbps. Still, considering low bands are giving the vast majority of Americans some sort of 5G coverage that is indeed faster and more reliable than any previous generation of wireless network, it's a great starting point for the technology.

Next up is mid-band. In the United States, this is referred to as C-band. In Europe and other parts of the world, the most common mid-band spectrum is known as n78. It includes frequencies between 1 and 6 GHz, offering speeds between 100 and 900 Mbps.

Mid-band spectrum has solid propagation, meaning wireless signals can travel a good distance, and the FCC is steadily opening larger swaths of it for development. Sticking with our real estate metaphor, service providers should have enough "land" to channel data at quite fast speeds. Now that licenses have been auctioned, the next challenge will be securing investment to purchase the equipment and deploy the networks that enable 5G connectivity. In any case, 5G deployment is expected to pick up in early 2022.

Finally, there is high-band. Also called millimeter wave (mmWave), this band provides the ultra-fast connections we are promised with 5G. The bands operate between 24 and 40 GHz with peak speed potentially up to 3 Gbps. Download speeds in this band can range from 10 to 100 times faster than 4G. While this is what the U.S. began rolling out initially, it quickly hit geographical roadblocks.

The propagation characteristics at high-band, or mmWave, are pretty limited, meaning that these wireless signals can only reach very short distances. Typically, you'll want to be within 1,000 feet or so of a 5G base station to receive the best mmWave coverage. It also works best outdoors, near a window, or inside a building which is specifically equipped with mmWave small cells.

However, technology is always evolving. In August 2020, Qualcomm, Casa Systems and Ericsson successfully established an mmWave data connection from 2.36 miles away, the longest range ever for that 5G band. Data shows that 5G-enabled phones are currently connecting to mmWave less than 1% of the time, so the full benefits of 5G speeds have yet to be experienced.

Where Will We Find 5G and When?

All three 5G spectrum bands will continue deploying globally throughout 2021 and into 2022 and 2023. As the 5G rollout proceeds, consumers will get a clearer idea of how fast their 5G will be. Ultimately, it comes down to two main factors: where you live and who your CSP is.

Fortunately, the 5G toolkit provides a wide range of frequency bands for deployment, each with differing characteristics. Low band 5G spectrum may be used for broad coverage in more rural areas, and high-band mmWave can provide blazing speeds in more urban environments. The mid-band spectrum recently and currently being auctioned will provide the capability to effectively span both and to provide near-ubiquitous 5G coverage at compelling speeds.

Even if you live in a major city and have access to mmWave speeds, exactly how fast they are varies based on your country of residence. In September 2021, Opensignal reported that South Korea has the highest average 5G download speed by far, averaging 406.5 Mbps. Taiwan, Norway, the UAE and Sweden round out the top five. 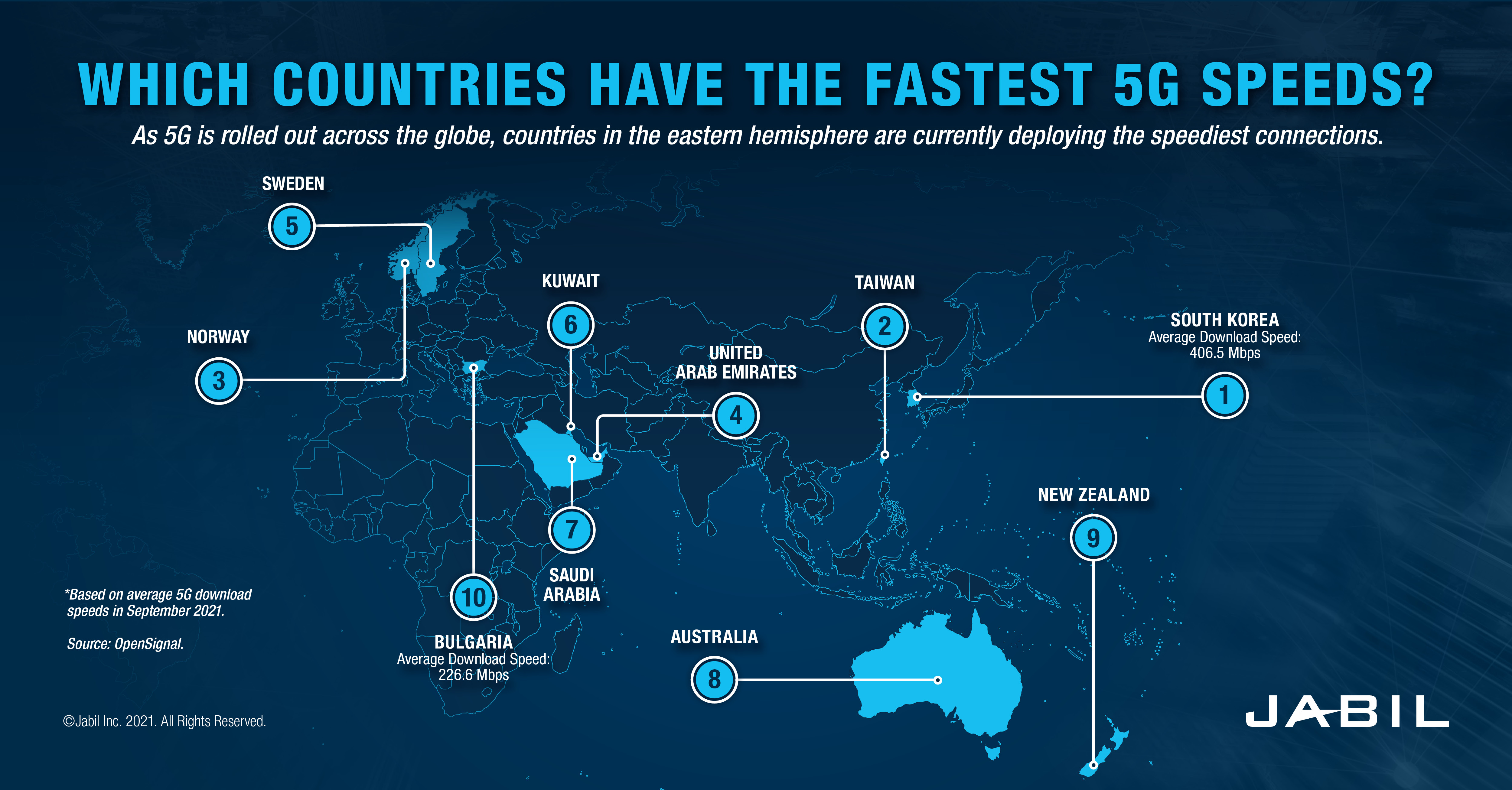 In this study, the U.S. did not crack the top 10 in average speed: including 5G download speed or peak upload speed. However, it did place in the top five for 5G availability and reach, meaning it is easier for people to access 5G for longer and in more places around the U.S. than in other countries. The most recent data found that average 5G download speeds in the U.S. were over 60 Mbps — more than twice as fast as the average 4G speed — in 34 states.

The second element that will determine the speed of your 5G is your cellular network operators or cellular service provider (CSP). Some are investing more heavily and rolling out 5G more aggressively. Speed and coverage will also depend on the strategy and spectrum holdings of the CSP. For example, some may choose to roll out low-band more aggressively to get broad coverage, while others may focus on providing ultra-high speeds in dense urban environments. These dynamics are playing out in real time as service providers clarify and update their 5G strategies.

5G Speeds and the Future

Speed is just one element in a suite of capabilities available in 5G. Coupled with advanced features such as ultra-low latency and support of millions of connections at one time on the same frequency, 5G technology will open new doors for innovation across industries. Ultra-high reliability connections may be the foundation for a new generation of autonomous vehicles. Augmented reality (AR), supported by ultra-low latency, is in the mix for retailers looking to give consumers the in-store experience right in their living room or perhaps enhanced mobile gaming and telepresence.

Network slicing, for example, can be the basis for private 5G networks, enabling enterprises to purchase or lease their own private slice of a 5G network to support custom connectivity needs, enhanced mobile security, and high levels of data protection. A strong 95% of respondents in Jabil's 5G survey believe 5G will deliver both these new technologies and new business models to support these innovations.

Considering just 12% of smartphones in use in the U.S. are 5G smartphones, where 5G can go, especially for consumers, is certainly still an open question. The impact of 5G's increased speeds will truly be seen as mid-band reaches the majority of Americans by next year and mmWave by 2024.

As this happens, we will look for 5G to "crash" the frozen progress bar and eradicate the spinning pinwheel.