ST. PETERSBURG, FL – June 28, 2022 – Jabil Inc. (NYSE: JBL) today announced the findings of its 2022 global 5G survey, reinforcing continued 5G adoption and a steady pace of deployments, despite persistent technology and business-related challenges. This latest poll on the state of the 5G industry complements the results of Jabil’s inaugural 2018 5G survey, which revealed varying opinions on the possibilities and potential for telecommunications companies, as well as their customers and partners.

“Continued growth in 5G complexity and diversity creates a wealth of opportunities as well as obstacles for traditional telco service providers, equipment manufacturers and software developers,” said Emanuele Cavallaro, president, Communications & Networking division at Jabil. “Our ability to collaborate with companies across the entire 5G ecosystem will push the boundaries of innovation to help 5G stakeholders reach their true potential.”

Jabil commissioned SIS International Research to conduct the 2022 5G Technology Trends Survey, with participation from 193 stakeholders directly involved in the development, implementation or adoption of 5G technologies at leading telecommunications companies. Decision makers from North America, Europe, the Middle East and Asia-Pacific weighed in on the current and future state of the industry, with the majority (64%) agreeing that it will take another one to three years before 5G technology will be adopted widely.

Other key findings include:

Waiting for the ‘Killer App”

Jabil’s survey participants are not completely sold on the idea that a yet-to-be-invented application holds the key to unlocking 5G’s true potential. In fact, only 42% strongly agreed that a “killer app” is needed to propel the industry forward. However, respondents believe the financial services sector holds the most promise with respondents ranking it first.

Transportation ranked second, receiving a boost from developments in connected vehicles and autonomous driving. Healthcare came in third, in part due to breakthroughs in wearables and connected auto-injectors. More than half of the participants (58%) assert the next “killer app” will come from the business world, with only a fifth (20%) looking at consumer-facing apps to accelerate adoption.

Overall, telecom stakeholders are bullish about 5G’s prospects, with 65% citing it as a superior technology that will dramatically transform telecommunications, up 16% from the 2018 poll.

Still, business-model challenges remain problematic among those surveyed, with 31% citing the creation of subscription models as the top impediment, followed by government regulations (27%) and erosion of market share by over-the-top providers (25%). Across the board, operational challenges have eased but network mapping (32%) and lack of 5G-enabled devices (31%) still cause problems.

Interest and adoption of Open Radio Access Network (RAN) has continued to expand along with its potential to transform networks with the prospect of open hardware, software and interfaces for interoperable, cellular wireless networks. Most of those polled (57%) believe Open RAN will be ready for widespread deployment alongside 5G within the next two years. In fact, 55% of survey respondents report they are seriously considering an Open RAN strategy while another 22% report already having a viable strategy in place. Across the board, survey participants believe that Open RAN will reduce capital and operational (capex/opex) expenditures.

Overall, companies were split in assessing where hyperscalers (e.g., Amazon Web Services, Microsoft, Google, etc.) fit into Open RAN strategies, with 44% believing they have a place. Two-thirds of respondents (67%) with an existing Open RAN strategy report that hyperscalers fit into their roadmaps. 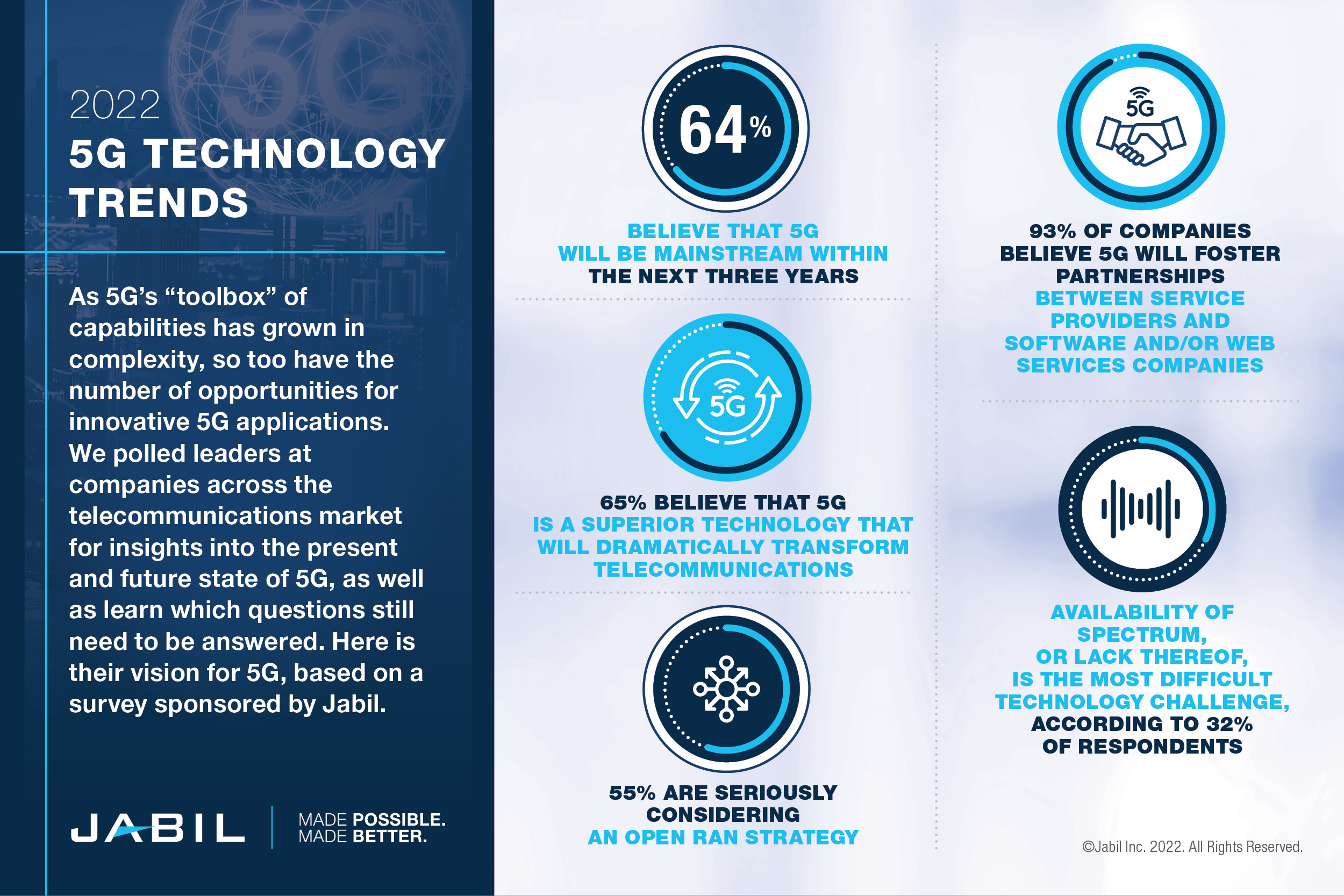 Jabil announced the results of a survey of telecommunications decision makers, which identified top trends, opportunities and obstacles in the development, implementation and deployment of 5G technologies.

About Jabil:
Jabil (NYSE: JBL) is a manufacturing solutions provider with over 250,000 employees across 100 locations in 30 countries. The world's leading brands rely on Jabil's unmatched breadth and depth of end-market experience, technical and design capabilities, manufacturing know-how, supply chain insights and global product management expertise. Driven by a common purpose, Jabil and its people are committed to making a positive impact on their local community and the environment. Visit www.jabil.com to learn more.