Additive manufacturing is currently the purest digital manufacturing technology available. It doesn’t require tooling or fixturing and has near-zero switching costs in moving a file from one printer to another and from one location to the next. That’s a radical departure from how manufacturing has been done over the last two centuries. With investments being made across the additive ecosystem, 3D printing has permeated nearly every step of the production process. Over the last two years, practical applications have expanded dramatically, according to Jabil’s 2019 Additive Materials and 3D Printing study, a survey of over 300 professionals responsible for 3D printing at manufacturing companies.

Prototyping is still the most popular 3D printing application overall; however, other applications are on the rise. For example, the number of respondents using 3D printing for production parts has nearly doubled since late 2017, growing from 27 percent to 52 percent. Among the industries we surveyed, consumer electronics is using 3D printing for this purpose the most. Meanwhile, the automotive industry frequently uses 3D printing for bridge production, with 57 percent affirming that they do so. Medical devices are leading in jigs, fixtures and tooling, as well as research and development. Finally, the transportation industry is most likely to use 3D printing for repair and maintenance. Download the full survey report. 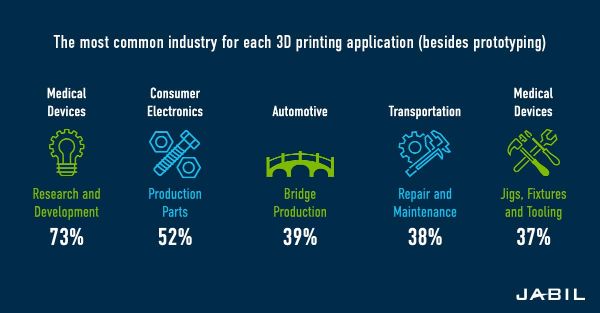 The reasons for increasing 3D printing applications are compelling. Nearly all respondents report that 3D printing is faster than traditional manufacturing. In fact, 25 percent report that it can be as much as 20 times faster, but most report that it is at least twice as fast. During a time when speed-to-market is essential, additive manufacturing can deliver numerous benefits in this arena.

In the years to come, more aerospace and defense companies will expand their use of 3D printing. In fact, the aerospace 3D printing market is expected to climb at a compound annual growth rate of about 27 percent to more than $3 billion by 2022, according to MarketsandMarkets. That is why it is important to be involved in the creation of standards for 3D printing applications in this industry. By getting the deep know-how and details on industry expectations, we can work toward innovating the technology and all its benefits for this industry.

Of course, as uses increase and new 3D printing methods are discovered, even more benefits will be unlocked. These opportunities will encourage smaller companies to experiment with new 3D printing applications and ultimately change their approaches to design, manufacturing and production. In the near future, 3D printing will be an established production practice across industries and transform how companies of the world manufacture their products.