Manufacturing companies can feel product cycles tightening around them. In our fast-paced world, consumers are tossing out devices with rapid regularity, calling for the newest gadget, the hottest feature, the most instantaneous service.

But how will manufacturing companies keep pace with this growing demand while continuing to produce increasingly complex goods?

Smart Manufacturing, Industry 4.0, the Digital Enterprise, Factory of the Future or whatever you choose to call it, is revolutionizing the industry as we know it. Unlike the first industrial revolution of steam and iron (remember when hot water was a nifty tool?), this industrial revolution is splicing computing power and machine technologies to fuel a better, more efficient workplace that harnesses the abilities of modern informational, operational and communication technologies.

According to the Huffington Post, early adopters who have at least partially implemented smart manufacturing initiatives have documented tangible results, with 82 percent reporting increased efficiency. This revolution will be greatly furthered by the implementation of 5G.

Qualcomm predicts that the transition to 5G will boost global GDP by $3 trillion and result in more than 22 million jobs by 2035, the equivalent of adding an economy roughly the size of India. Additionally, according to Jabil’s 5G Technology Trends survey report, 72 percent of 5G experts predict that 5G solutions will be adopted for business applications first and the Industrial Internet of Things will be one of the strongest short-term drivers. Download the full 5G report. 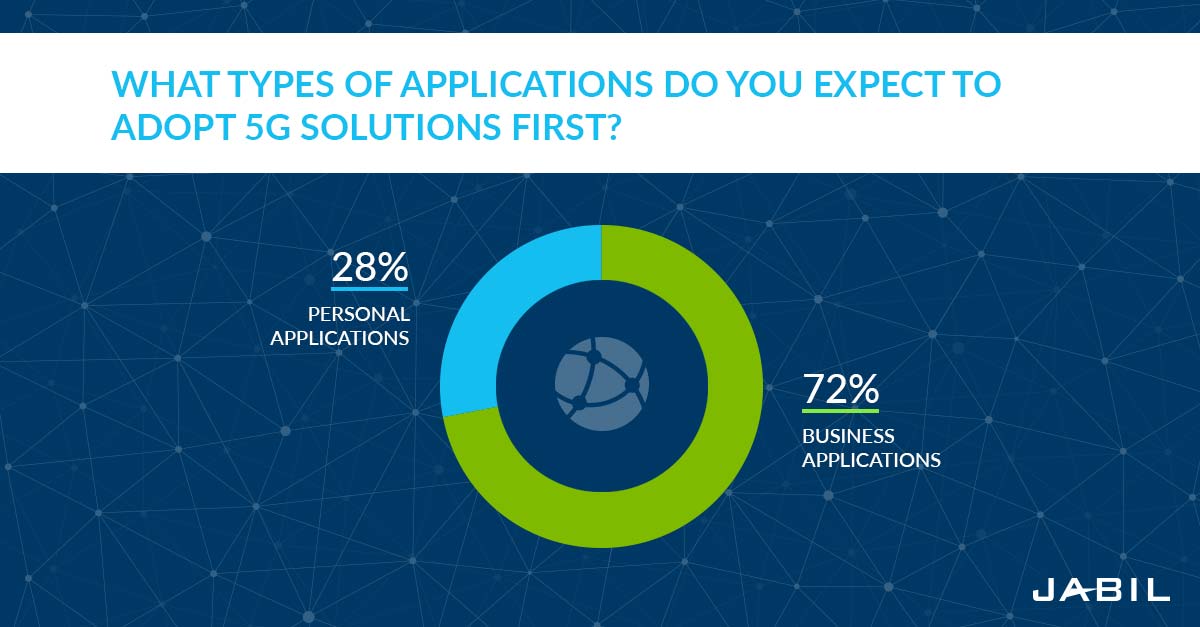 The lower latency, higher bandwidth, faster speeds and greater capacity powered by this new generation of wireless technology are driving the digital transformation of the manufacturing industry in a variety of areas, such as artificial intelligence, augmented reality, predictive maintenance and collaborative robots.

Harnessing the Potential of Artificial Intelligence

According to a study published by Markets and Markets, the artificial intelligence (AI) market was worth $16 billion in 2017; and it will reach more than $190 billion by 2025, a CAGR of 36.6 percent. As the popularity and applications of this technology grows, the experts predict that it will become an industrial game-changer; Boston Consulting Group and MIT Sloan Management Review published a study that found that out of 3,000 respondents, 84 percent expect AI to enable them to obtain or sustain a competitive advantage.

Shortening production cycles make it more difficult for manufacturers to keep up with the demand for increasingly complex products while maintaining and complying with quality regulations and standards.

Even though products are flying out of the manufacturing plant at unprecedented speeds, customers are not lowering their expectations for high-quality, functional products. Companies must battle defect rates and strive to eliminate recalls. This is where AI can help.

In addition to predictive maintenance, which I will elaborate on later, AI can be used to improve quality control in factories. Visual inspection systems that don’t use AI have to be trained with data sets of around one million images to ensure that they can identify all potential flaws. AI can reinforce existing infrastructure and human resources, empowering workers to swiftly identify mistakes and faults that weaken the production chain and product quality.

For example, here at Jabil, we have been using this technology to catch errors early in the progression of circuit board manufacturing, allowing us to identify flaws at step two or three of the 35-40 step process. The accuracy rate has been 80 percent in detecting failures, saving 17 percent in reworking cost and 10 percent in energy. When an issue is detected earlier, it allows the company to be more efficient, cycles to accelerate and customer satisfaction to increase. However, this approach requires 5G-enabled access to large quantities of real-time, quality data to achieve maximum efficiency.

Augmented reality (AR) can also help technicians identify problems more quickly. Unlike virtual reality, AR does not cloak the physical world; it simply enhances it with a digital layer. By utilizing an augmented reality solution and a tablet or HoloLens, the troubleshooter can identify the issue much more quickly and effectively, which frees up time both for resolving the problem and sharing the data more quickly between production sites.

This solution is already being utilized by a team of Ericsson researchers and engineers, who have already streamlined and improved the troubleshooting process by utilizing AR.

The company found that their technicians spent approximately half of their repair time performing non-value activities, such as finding and linking schematics with layout files, fault info and troubleshooting instructions. With AR, the technicians have minimized the amount of time wasted simply trying to locate the problem, allowing them more time to perform tasks that benefit the company.

Poor maintenance strategies can impede a plant’s overall productive capacity by 5 to 20 percent. Studies have also shown that unplanned downtime is costing industrial manufacturers an estimated $50 billion each year, and asset failure is the cause of 42 percent of unplanned downtime. This poses a quandary for manufacturers; either they must take the machine offline to ensure the technology is functioning at full capacity, thus halting production, or they risk running the machine longer than it should and causing it to malfunction, potentially freezing production for an even lengthier period.

Traditional preventative maintenance entails manual number-crunching and an excess of time that manufacturers cannot afford to spare. This method is tedious and too ineffective given the sheer amount of time that it consumes.

Studies indicate that improving the accuracy of detecting costs of performance degradation across multiple manufacturing scenarios reduces costs by 50 percent or more.

Even though Wi-Fi has changed our world and expanded our capabilities in ways too diverse and numerous to list, we all have watched the blue circle on our laptop screen twirl around…and around…and around…and around…as we wait for a webpage to load. On the manufacturing floor, these frustrating delays can be costly, limiting productivity and shrinking profits.

Already, mobile Internet connections are stronger than Wi-Fi in several countries. Hoping to take advantage of the higher data speeds and greater reliability, several manufacturers – especially those in the automotive space – are considering actualizing a private 5G network. In addition to network speeds 10 (or more) times faster and 50 times lower latency, 5G solutions can support many more devices than 4G; this will be very useful for IoT companies that use numerous connected devices in concentrated areas (i.e., manufacturing facilities).

According to Technology Review, 5G can be programmed to treat different types of data or equipment differently. For example, it could favor mission-critical devices, so they keep operating even if the rest of the network is disrupted.

German automaker Audi is planning to launch its own 5G network over the next few years. They see it as a necessary investment to ensure that manufacturing robots and other devices work faster and more securely than possible with existing Internet solutions. Other automakers, such as BMW, Daimler and Volkswagen, might not be far behind.

When a parcel is being delivered, it may pass through numerous hands and checkpoints. This poses a problem of responsibility, ownership and insurance in the supply chain. If a package is damaged, when did it happen and who is accountable? Visibility into a delivery’s route is crucial for supply chain management. Unfortunately, with modern tracking methods – QR code scanning and RFID – product logging is typically only done at upon arrival and it only records the location and time; if damage occurs, it can be difficult, if not impossible to pinpoint at what stage of the journey it happened.

Significant progress has been made with smart packaging. However, the next generation of wireless can take packaging tracking to a new level. With 5G sensors installed on packages, supply chain stakeholders can determine information about a package, such as the location, temperature, humidity, g-forces, moisture level and more. They will be able to receive real-time feedback on the status and condition of products as well as eliminate the need for manual checkpoints.

According to an MIT study, collaboration between employees and robots at a BMW factory reduced human idle time by 85 percent, thus leading to an immediate increase in productivity. Thanks to increasing robotic capabilities, they can adapt to changing conditions and execute on a variety of responsibilities.

Robotics have long been used in automatic assembly, rolling out vehicles and other manufactured products in an efficient, Ford-ist fashion. They can be used to transport goods, or on a utilitarian level, robots can clean up messes on factory floors. Similar robots are already being used in grocery stores. GIANT/MARTIN’S and Stop & Shop brands recently deployed one of the largest uses of in-store robotics in the U.S. in tangent with a partnership with Badger Technologies. Affectionately called “Marty,” these googly-eyed machines patrol the store floors to take care of spills and mitigate hazards. While these autonomous robots are performing menial and repetitive tasks to keep the workplace hazard-free, employees are freed for more value-added tasks.

Although autonomous robots are already used in factories (and retail spaces) across the world, for robots to be able to interact with the environment in real-time, large amounts of information will have to be transferred almost instantaneously. The enormous amount of intelligence that robots requires poses a dilemma for manufacturers. Right now, they are forced to establish complex machine and control systems that slow development cycles and hinder uptake in new sectors.

Cloud robotics enabled by 5G will solve these problems by putting systems intelligence in the cloud and simplified robotics on the factory floor, amplifying their ease of use and efficiency. The key to productive robotics is a strong, reliable connection that is improved with 5G solutions. By bringing the data closer to the source, 5G offers significantly better speed than previous iterations of wireless and significantly improved data. 5G also allows greater flexibility, which empowers manufacturers to keep modification costs low while being able to adjust to changes in the ever-evolving manufacturing environment.

Although several industries – healthcare and automotive to name a couple – will benefit from cloud robotics, manufacturing is one of the leaders in adoption, according to Ericsson. Nokia’s factory in Oulu, Finland, has an almost 100 percent automated process., which they hope to augment with 5G (Ironically, the purpose of the factory is to create 5G solutions.)

5G is poised to change the world in a variety of ways, from streaming videos more quickly to creating autonomous vehicles to empowering remote surgery with real-time reactions. Its unprecedented speed and coverage will bring the world closer than it has ever been and give rise to never-before-imagined capabilities. It will transform several industries, including manufacturing.