Why The Chips Are Down: Explaining the Global Chip Shortage

The supply chain bottlenecks we're experiencing across the globe start with components. Rather, they start with component shortages. Of all the component shortages, by far the most severe is for certain semiconductors, or chips. The current global chip shortage rivals only a few of the past imbalanced markets. However, it's unique in the breadth of product families feeling the gap in supply and demand.

Despite headlines to the contrary, we are not experiencing an end to the global semiconductor shortages. Based on market data and conversations with our customers, we expect the basic semiconductor market to be constrained well into 2023, at least; the market for complex semiconductors (microcontrollers, microprocessors and FPGAs, to name a few) will be tight throughout 2023. There has simply never been higher demand for semiconductors. Globally, the semiconductor industry is expected to grow by approximately 7% between 2021 and 2022, from $595 billion to $639 billion — the first time the market has reached this revenue milestone.

A few segments in particular are fueling the current spike: the growth of the Internet of Things (IoT), 5G and automotive, especially the electrification of the automotive industry. Throughout 2022, some previously strong drivers of chip demand — consumer electronics like smartphones and laptops — has slowed, creating issues for companies that now have too much inventory or the wrong inventory mix. Still, soaring demand in these other areas is creating shortages of the semiconductors necessary to their creation.

Like most unpleasant things in our lives over the past two years, there is a single underlying cause of the global semiconductor shortage that is now prolonging and exacerbating it: COVID-19. The demand caused by the pandemic is straining capacity at all points of the supply chain, starting with component suppliers.

The COVID-19 pandemic kickstarted the chip shortage, and its long-reaching effects — including virus outbreaks, labor challenges and geopolitical uncertainties — have fueled it. Each link of the global supply chain continues to be extremely disrupted. Unfortunately, there are no signs of recovery in the near term.

This is because the pandemic also spurred a snap back in growth and demand so remarkable and unpredictable that supply chains will struggle to keep up until that demand falls to a more manageable level or more capacity and component supply chain issues are resolved. All commodities initially saw demand drop precipitously with the onset of COVID-19 and the shutdown of factories. Then, the massive consumer spending we saw after the pandemic's initial shocks had settled created a V-shaped recovery of the global economy, spurring an extraordinary need for semiconductors. Now, we are facing chip shortages, unprecedented lead times from analog suppliers and huge price increases. Risk has been elevated to unparalleled levels all along the semiconductor supply chain.

Impacts from this sustained demand are primarily being felt at wafer foundries. Wafer starts are the main constraint within the chip supply chain. Even the world's largest chip maker, TSMC — which controls 28% of global semiconductor manufacturing capacity — is experiencing ongoing shortages. To ramp up chip production, manufacturers including Texas Instruments, Intel and TSMC are investing billions of dollars into the construction of new fabs. However, this is not a quick fix; these new facilities aren't expected to be production-ready until 2023 and beyond.

International governments have also joined the push to increase chip capacity. In July 2022, the United States Senate and House of Representatives passed the CHIPS Act, which includes about $52 billion in government subsidies for research and production of semiconductors in the U.S. The bill also provides chip plants with tax credits worth about $24 billion, with the goal of spurring U.S. chip manufacturing to alleviate some of the supply chain issues hampering the country's automotive and consumer electronics industries, among others.

The European Union is planning a "Chips Act" of its own to increase the production of semiconductors within Europe, while South Korea has committed $450 billion to its own industry, and the Japanese government is partnering with TSMC and Sony to open a new fab by the end of 2024.

Beyond wafer foundries, wire bonding, substrates, materials and testing are all seeing shortages or delays. In China, continuous COVID-19 outbreaks and heat-induced power outages have impacted the supply of raw materials and assembly and testing. Further, the invasion of Ukraine has increased the prices and limited the supply of raw materials used in semiconductor production, causing turmoil throughout key markets for the industry.

This continued mismatch between demand and supply is pushing lead times ever longer. As of summer 2022, lead times for most semiconductors — no matter the type — are running at least 40 to 50 weeks, with many in the 50 to 60-week range. Essentially no waits are shorter than 30 weeks, but most are far longer (70-plus weeks).

Analog chip suppliers are seeing an average book-to-bill ratio (the number of orders placed vs. the number of orders filled) above 1:1, indicating backlogs. High-end semiconductors like microcontrollers (MCUs) and chipsets are still constrained, with positive book-to-bill ratios, but the decreasing demand for smartphones and consumer electronics will allow manufacturers to catch up on orders for other industries. Most of these high-end components are in allocation, with average lead times running 52 weeks or more. 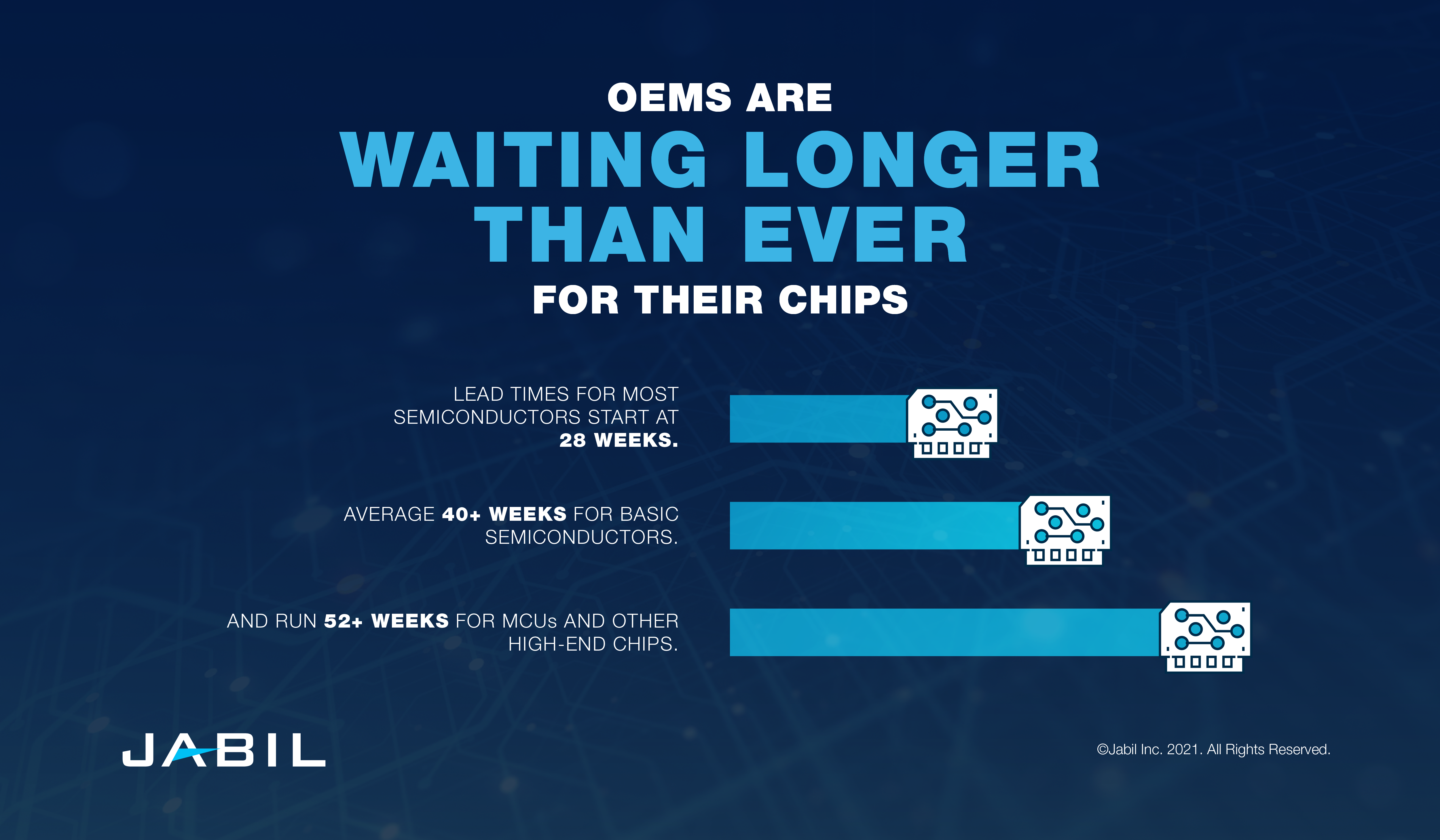 As lead times have increased, so has pricing. Raw materials, foundries test and assembly, logistics and labor have all become more expensive than ever. In turn, semiconductor suppliers are being forced to pass their costs on to their customers to help stabilize the supply chain. TSMC — again, the world's largest foundry supplier of 300mm wafers and the most advanced process nodes — announced will raise chip prices by 6% in January 2023 after a 10% increase for high-end semiconductors and by 20% for less advanced chips in August 2021.

Across the board, chip suppliers have raised prices between 10% and 20%, on average, in response to supply constraints, increased shortages, costs of raw materials and inflation throughout the second half of 2022. Like shortages, price increases are expected to continue into 2023.

Having already taken blows from 2021 and 2022's uncertainties (so far), the markets that rely most heavily on chips — including automotive, 5G and the IoT and smartphones — are braced for more unknowns.

How Have Chip Shortages Impacted Markets?

The automotive industry has likely been impacted the most by the chip shortage. Depending on its level of connectivity, the average car can have more than 100 chips on board, with many vehicles requiring thousands of semiconductors to control safety features, the electrical and powertrain systems, infotainment, connectivity, and more.

As a TSMC spokesperson told Time, the roots of the industry's current chip challenges date back to 2018. Everything was becoming connected, from packaging to refrigerators, and smartphone demand was skyrocketing, but demand for cars was soft. To meet the need, semiconductor manufacturers began allocating more supply of now-critical automotive components like MCUs to other industries. This became a huge problem when car demand jumped unexpectedly in the last quarter of 2020 and continued through the first half of 2021 thanks to low interest rates and consumers having more expendable income than they anticipated.

By the spring of 2021, ramifications of the chip shortage had become clear to the auto industry. Factories have been forced to cut production or even close down temporarily due to parts disruptions. Putting more pressure on this limited supply of chips is the growing number of electric vehicle mandates being issued by governments around the world. Industry experts and auto makers have already expressed concern that a prolonged chip drought could delay the rollout of these new vehicles, particularly in the United States.

Chip shortages are also driving up the price of new cars. The average price of a new car hit record highs throughout 2021 and 2022, coming in at $46,259 in August 2022; the average price was $40,000 at the end of 2020. According to J.D. Power, while the number of new cars actually decreased 2.6% year-over-year between August 2021 and 2022 — due to a combination of supply constraints and a drop in demand caused by inflation and growing interest rates — consumer spend on new vehicles is up 13% in the same timeframe.

All told, it's believed the chip shortage cost automotive OEMs around $210 billion in lost revenues for 2021, with many individual brands continuing to bring in lower-than-expected quarterly results and adjusting their future financial targets as a result throughout 2022.

It's taken longer, but the smartphone market is also feeling the impact of chip shortages. Smartphone sales were on the rebound throughout 2021 after a 2020 dip, but in Q3, global shipments slid 6% when compared to Q3 of 2020; supply couldn't meet demand.

Gartner noted that smartphone companies are delaying launches of some of their most in-demand products due to the shortages, but production of basic smartphones is more heavily impacted than premium smartphones (sales of which are actually up). In a report tied to the third-quarter smartphone sales, an IDC analyst explained that supply issues for most smartphone companies won't be resolved until well into 2022. However, some of the most in-demand phones are expected to become more available by February 2022.

The chip shortage is also slowing or halting IoT projects — including the implementation of IoT modules that use 5G networks. Demand for cellular IoT chipsets and modules had been surging as companies worked to implement 5G technologies, but a 6% drop in shipments in Q3 2021 will hamper that growth. Every connected device, from smart meters to point-of-sales systems at retail stores, uses these chipsets, and this delay could further delay the long-awaited conversion from 4G to 5G.

Additionally, as the raw materials needed for semiconductors continue to be limited in supply, they will likely be first allocated to the high-end chips used in cars and smartphones, rather than the simpler microcontrollers and sensors used in IoT devices. A report from Forrester on IoT in 2022 predicts that it will take longer for the IoT market to regain the supply of chips needed to meet demand.

The full effects of the shortages have yet to be seen on 5G's rollout. However, a number of telecommunications companies warned the F.C.C. in June 2021 that a lack of chips could have significant impacts on the deployment of 5G connections.

So far, industries have dealt with the chip shortage in mostly short-term ways. The automotive industry has turned to on-the-fly decisions like cutting high-tech features from new car models. Meanwhile, the smartphone industry was able to ride out the early stages of the shortage by using semiconductors they had stockpiled at the beginning of the pandemic — a solution that, as previously mentioned, is no longer viable. Making it through this, or any, component shortage starts with a resilient supply chain strategy built on visibility, predictability and communication.

How to Navigate the Global Chip Shortage

Perhaps the only thing that can be said with certainty about the global chip shortages is that no one is certain when they will end. If demand holds as expected based on market data and conversations with our customers, we expect the semiconductor market to be tight well into 2023.

All in all, the answer to this burning question is not "soon."

There's no easy way to get around a short supply of semiconductors and rising costs when every company is in the same boat. However, there's a big difference between a leaky kayak and a powerboat that is capable of navigating rocky waters. Every original equipment manufacturer (OEM) can take a series of steps to ensure they're in the best position possible as chip shortages persist: 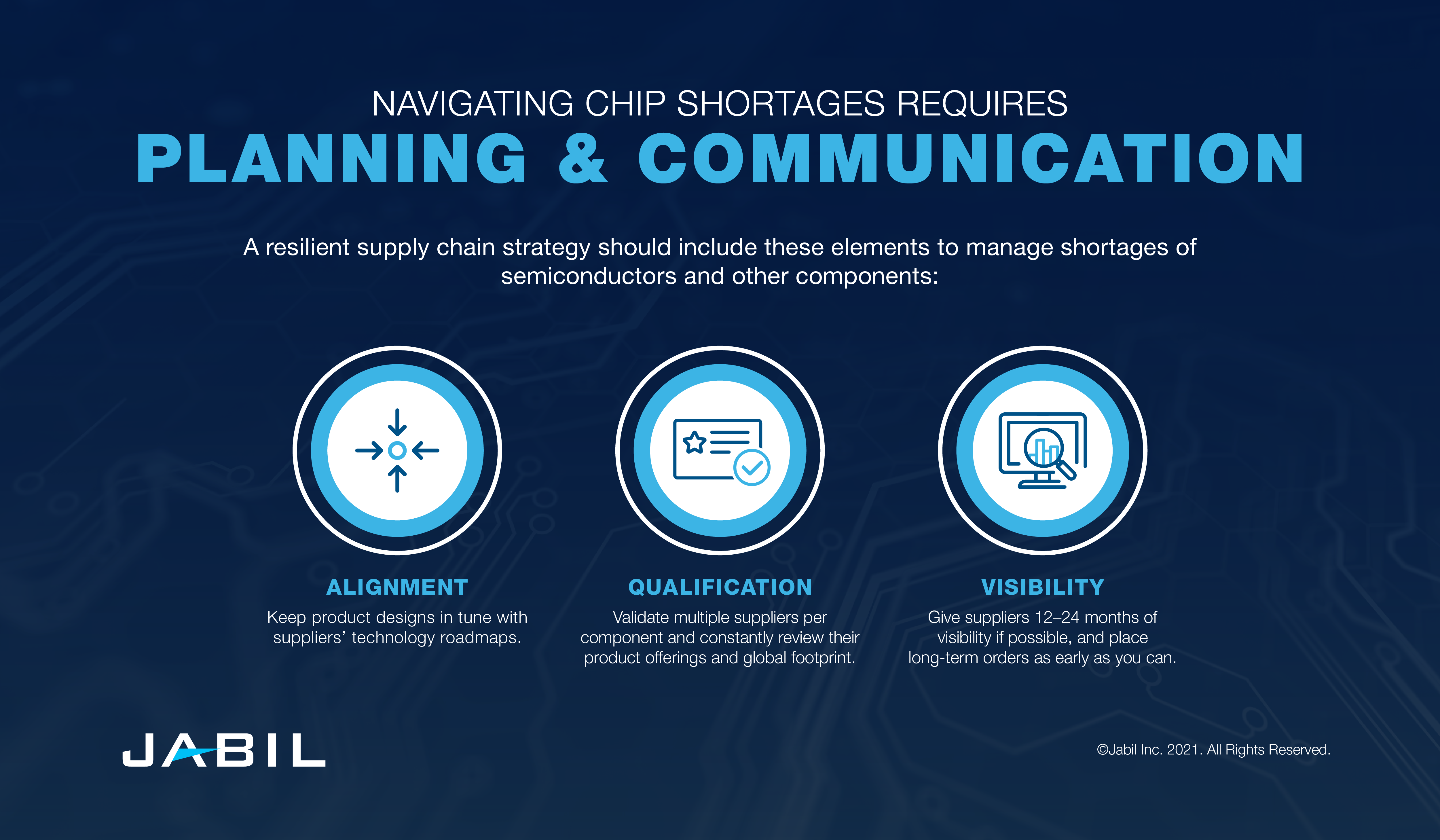 Both short-term and long-term strategies are necessary to withstand the challenges posed by the semiconductor shortage. This is not the only ongoing component shortage, and it certainly won't be the last.

The pandemic has thrown the global supply chain into disarray. But the challenges of the past few years have also revealed its deep interconnectedness and thus emphasized the critical importance of strong supplier relationships and a prepared, resilient supply chain and procurement strategy. Wherever the chips fall this time around, it's always prudent to have a plan.

How can Jabil's supply chain team help your business? Contact us.