5G is Set to Impact These Three Key Industries

The world is several steps closer to the widespread implementation of 5G, a technology that will impact consumers as well as a broad range of industries. A few months ago, 3GPP — a partnership of seven telecommunications standard development organizations — approved the completion of the standalone Release 15 5G specifications. This gives manufacturers the information they need to create 5G devices.

The widespread implementation of 5G is starting right now. In Jabil’s 5G Technology Trends survey of 204 telecommunications stakeholders, 60 percent of participants said they believe 5G will reach mainstream status within the next two years. This amount jumps to 92 percent of participants when considering a four-year timeline. Download the full report.

5G is not necessarily an extension of 4G wireless communication. Instead, 5G has its own distinct capabilities and infrastructure. The next-generation mobile broadband encompasses as many as 17 different technologies, including 5G New Radio (NR), millimeter wave, massive MIMO (multiple-input multiple-output) radios and network slicing technology. The goal of 5G is to offer three core services: enhanced mobile broadband, ultra-low latency and massive connectivity for machines. Basically, the network bandwidth will be greater, which will allow more devices to communicate via the network at the same time. Network speeds will also be faster, and there will be less lag time in communications.

The benefits of this new technology will no doubt improve the ways internet-connected devices are used and enable new possibilities in terms of products and services. But between now and this connected future, the transition will be complicated and require sizable infrastructure investments. In line with this, 72 percent of the survey participants believe 5G business applications will come before consumer applications. Specifically, the automotive and transportation, healthcare and manufacturing industries all are primed to benefit from 5G.

The automotive and transportation industry is undergoing its own revolution as innovations—such as vehicle connectivity, advanced driver-assisted systems (ADAS) and more—are being added to cars at a rapid pace. In addition, the release and adoption of autonomous vehicles will change the way cars work, streets are designed and people travel.

While these technologies do not need 5G to work, 5G will certainly make them work better. Connectivity, ADAS and infotainment systems create and transmit massive amounts of data that can burden slower systems. The larger bandwidth of 5G, as well as the low latency, can handle these large data packets quickly and reliably. This also means that cars will be able to receive higher-definition information, Eric Adams writes on The Drive. For example, the fast data-transfer speeds of 5G can enable data-intensive augmented reality systems to wirelessly transmit high-definition navigational instructions and vehicle alerts to drivers. This would give a driver more information about a route so that he or she can arrive at the destination safely and on time.

The ability to receive the large file packets of media-rich services will also be a nice source of entertainment for riders in autonomous cars, Adams adds. Because passengers won’t have to worry about watching the road, they instead can stream movies or shows for entertainment or participate in video conference calls for work.

More importantly, this high-speed connectivity will enable a safer driving experience. Autonomous cars will navigate roads based on information input by the riders, such as the destination, as well as information received from other cars and the surrounding infrastructure, according to Carritech. For example, parking meters could transmit signals to autonomous cars to help them find a parking space efficiently. This could save as much as $140 billion in congestion avoidance, Qualcomm reports. Similarly, a street light could send a signal to the autonomous car to alert it that the light has changed, or one autonomous car could communicate to the car behind it that it is stopping for a pedestrian. On a larger scale, vehicles could communicate with a cloud to report and receive information about weather conditions, heavy traffic, and other road obstructions. These accident-avoidance measures could save $500 billion.

Although all of this data will help vehicles travel safely and optimize traffic flows, the information also would burden a slower mobile broadband network. Conversely, 5G is expected to be able to process and transmit all of this data in milliseconds, which could make the difference between a smooth ride, a close call, and an accident.

Just as 5G will change the way people travel in cars, the service also will create new ways that the healthcare industry can deliver services to patients. The growing practice of telemedicine integrates wearable sensors, video conferencing and more to connect primary care physicians, specialists, and patients in different places. This means that patients in rural areas don’t necessarily have to drive long distances to see a doctor, and parents don’t have to pull sick children out of their beds to see a pediatrician.

Virtual visits and monitoring are no doubt a real timesaver for patients, but the efficiency and convenience of this service currently is limited by 4G network capabilities, AT&T points out. As more devices enter the market, more bandwidth is being utilized, which reduces connection speeds and increases latency. In turn, this cuts down on the number of patients a doctor can help in a day and increases the wait time for patients to virtually consult with a doctor, the company says.

To illustrate the growing network demand of telemedicine, Market Research Future projects that the global telemedicine market will increase at a compound annual growth rate of 16.5 percent from 2017 to 2023, which would more than double the size of the market. 5G is expected to have more than enough bandwidth to handle this and other demands on the network, adding greater efficiency and reliability to telemedicine. In addition, because 5G does not require a wired connection, more people will be able to access the network wirelessly through the wider radio spectrum.

Qualcomm imagines a future in which patients who might need a little extra monitoring, such as a person who recently suffered a heart attack, could wear special sensors to track their vitals at home. If something goes wrong, the sensors could quickly and automatically contact the patient’s doctors, hospital or nearby EMTs via the 5G network with specific details about the issue so that they can quickly and effectively treat the patient.

5G will increase the speed of communication within and between hospitals. Large files from MRI machines and other imaging devices can take a long time to upload and transmit to a specialist for review. Sometimes these transmissions fail because of bandwidth limitations. Using a high-speed network with a larger bandwidth can significantly reduce transmission times. For example, the Austin Cancer Center used to transmit medical images after hours when there was less demand on the network. However, since implementing AT&T Network on Demand, which allows the facility to increase and decrease its bandwidth as needed, the facility can transmit the files as soon as the patient leaves the scanner, AT&T reports. When medical facilities switch to 5G, these transmissions could be even faster and more reliable.

5G also will enable lifesaving services outside the walls of a home or hospital. According to the American Legislative Exchange Council: “The high speed and low latency … of 5G could allow first responders to access high-definition images of an emergency event, like a car crash, and make assessments of patient health before arriving [at the scene]. In high-risk moments where every second matters, 5G could quite literally be the difference between life and death.”

In addition to the lifesaving benefits 5G will deliver to patients, Qualcomm projects that the next-generation mobile broadband will enable $1.1 trillion dollars in economic output in the health care sector by 2035.

Although some of these technologies already are in use, 5G will make them better. At the 2018 Mobile World Congress Americas, Nokia and Verizon demonstrated the difference in productivity between an automated guided vehicle (AGV) controlled via Wi-Fi and an AGV guided by 5G. As both AGVs were transporting pallets, cartons, and products throughout a facility, the 5G-connected AGV was able to quickly react to an obstruction in its path, thanks to 5G’s speed and low latency. By comparison, the Wi-Fi–connected vehicle stalled when it reached the obstruction, which in turn would slow down manufacturing operations.

Verizon also has been testing the use of a robotic arm connected to the company’s 5G network for remote inspection. In a trial, a user in an offsite location who was wearing a tactile glove could feel the different textures and monitor the temperatures of items a robot touched on a factory floor. This could help workers safely inspect potentially hazardous situations.

As more technologies take on the grueling and dangerous tasks of manufacturing, the industry should incur fewer injuries. The Bureau of Labor Statistics reports that the manufacturing industry incurred 394,600 nonfatal injuries in 2017. This is the second-highest nonfatal injury rate among tracked occupations. By comparison, the transportation and warehousing industry only incurred about half as many injuries, and the mining, quarrying, and oil and gas extraction industry – the industry with the lowest non-fatal injury rate — incurred about 9,800 injuries.

The speed of 5G also will enable better production monitoring than ever before. In trials, Ericsson was able to achieve nearly 1 millisecond of latency in data transmissions. This speed is fast enough to help manufacturers monitor the operations of high-speed machines, which has not been possible with slower technology. Last fall at the International Manufacturing Technology Show, Ericsson, Fraunhofer Institute for Production Technology (Fraunhofer IPT) and GF Machining Solutions debuted a 5G-enabled technique for monitoring the operations of high-speed milling machines used in high-precision manufacturing. Some milling machines can vibrate intensely during production, which can disrupt the dimensional consistency of products manufactured at high volumes. In the case of manufacturing blade-integrated disks for a jet engine’s compressor, manufacturers would have to deal with as much as 25 percent rework for out-of-tolerance parts. Ericsson, Fraunhofer IPT and GF’s solution can instead monitor production while it is in progress — instead of after the machining is done — and alert manufacturers about any issues with the production process. The trio expects that this could yield as much as $30 million in savings a year for a single factory.

With faster speeds, greater reliability, and more bandwidth, 5G will help manufacturing companies be more productive and save them time and money from errors, machine downtime and other issues.

In the near term, the implementation of 5G is an evolutionary update. It will enable connected devices and networks to work faster and better than they did before. Cars will be able to stream navigation information faster, doctors will be able to virtually visit more patients, and machine productivity will be improved. Although these changes are an improvement compared with current operations, at the end of the day, they really are just incremental steps.

In the years ahead as the technology reaches widespread adoption and the number of use cases grows, 5G will be revolutionary. The faster, more robust and more reliable network will power smart cities, smart cars and more. 5G will deliver the connected future people have been dreaming about for decades and create a safer, more productive and more exciting world for all. 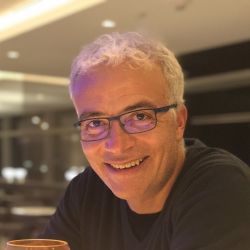