As the automotive industry pushes forward to the distant reality of fully autonomous vehicles, demand for Advanced Driver Assistance Systems (ADAS) is growing rapidly. The integration of automotive ADAS technology into an increasing number of new vehicles has helped make partially automated driving (Level 2 autonomy) a reality for a growing number of drivers. Continued improvements in the technologies that comprise ADAS have helped reduce cost, allowing some features to migrate from high-end vehicles to more mass-produced vehicles.

ADAS is already one of the fastest-growing segments in automotive electronics as it can be considered to serve as the bridge from non-autonomous to fully autonomous vehicles. The closer we get to Level 5, fully autonomous driving, the more robust and comprehensive automotive ADAS will become.

ADAS is commonly understood to include five key components:

A Compelling Use Case: Driver Monitoring

Driver and passenger safety is always first in the automotive sectors. With all the major components we discussed earlier, new vehicle interface features have been enabled for automotive ADAS. One example of this is around the next generation in-car sensing technology work eyeSight Technologies is doing regarding driver monitoring, in partnership with Jabil.

Driver distraction and drowsiness are two of the major contributors to accidents and fatalities. With all the enhanced features and entertainment content entering the vehicle, the driver must still focus on driving. These in-car sensing technologies help do that by monitoring whether the driver is distracted or sleepy.

The technology uses machine learning computer vision software to monitor several parameters around the driver’s head and face such as:

The system can also recognize driver’s faces and estimate their gender and age.

In one use case, if the driver is experiencing a high PERCLOS (the percentage of time the eyelids are closed), the system can take other parameters into account to determine the driver's state of drowsiness. Then, car manufacturers have an opportunity to further personalize a response system that may include rattling the seat or sounding an audible alarm to keep the driver alert and reduce the risk of an accident.

Driver Monitoring is also an indispensable feature as we move through the implementation of ever-increasing levels of automation and autonomy. These automatic systems will need to assure themselves that an awake and attentive driver is at the wheel in order to transfer control back to the driver.

Connectivity is a Critical Element in the Future of Automotive

In a 2018 survey sponsored by Jabil, Automotive Product Development and Launch Cycles, 53 percent of respondents indicated that better connectivity was the primary driver of innovation.

Automotive connectivity is a critical element for the future of automotive because it will help pave the way for the autonomous vehicle. One key aspect is for vehicles to talk to each other (V2V) and to talk to the infrastructure (V2I). There is a strong push to get connectivity features in every new vehicle to enable elements like entertainment content and streaming, but more importantly an autonomous world.

4G technology is limited in its bandwidth and ability to cope with copious amounts of data. For example, in high-density areas with a high density of connected vehicles all demanding the same bandwidth from the network at the same time, 4G would not be able to support all the data. Therefore, mobile technology progress is needed to enable full high bandwidth connectivity for densely populated areas. In addition, 4G coverage doesn't even extend to all rural areas.

5G may be the answer, however the standards for the technology aren't defined yet. 5G is recognized as a high-bandwidth, next-generation technology that will be a significant evolution over 4G, but even a split-second latency would remain a concern for the automotive industry. 5G could potentially enable new autonomy features, but it certainly won't be able to cover everything.

The Average Age of Vehicles on the Road Matters

In addition to the required upgrades necessary in wireless connectivity and infrastructure, there are concerns around vehicles that are currently on the road. Today's car owners are keeping their vehicles for much longer than in the past, averaging a record 11.6 years in the U.S. alone. When we examine these trends in Europe, we see the average age of cars on the road lasting from 7.7 years in the U.K. to a high of 13.5 years in Greece.

With more than 1 billion cars on the road around the world, these numbers create a fairly risky situation for the autonomous vehicle. In a future filled with autonomous driving, all vehicles must have the ability to talk to each other and the environment around them. These cars will need to be "retired" to allow a safe driving environment. Regardless, this is another reason implementation of level five autonomous vehicles are going to take at least a couple of decades.

In Automotive, Safety is One Thing, Cybersecurity is Another

In a September 2017 episode of the podcast Hackable, the host Geoff Siskind pairs up with the author of "The Car Hacker's Handbook" to showcase how to hack a car. With the use of a black toolbox, the hacker is successfully able to control features of the car through its diagnostic port. Hackers could utilize tiny devices that grant access to the car from anywhere in the world, via cellular capabilities.

A 2018 survey by Morning Consult shows that 67 percent of Americans are somewhat or very concerned about cyber threats to driverless cars. The ask is clear: automotive companies must prioritize cybersecurity the way consumer electronics do. I think we will see a lot more manufacturers focusing on this aspect to provide a safe automotive ADAS experience.

Seventy-six percent of the 2018 Automotive Product Development and Launch Cycles survey respondents believe that the new players in the industry have shortened go-to-market. But more importantly, 99 percent see these high-tech companies creating more opportunities for the automotive market, whether that be in delivering a different customer experience or becoming more data-driven. 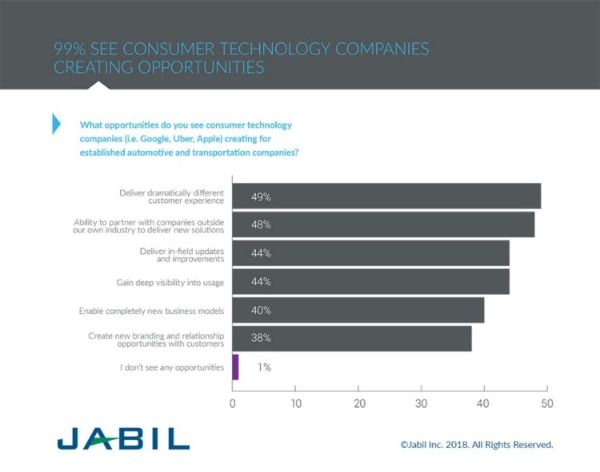 While Level 5 autonomous vehicles are still a distant reality, ADAS is progressively shortening the distance. In the meantime, we must focus on our capabilities around infrastructure and connectivity to enable a world where all of this is possible.

Insights from over 200 automotive OE and Tier 1 decision-makers on technology adoption, opportunities and challenges.