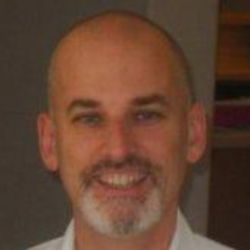 When most people think of augmented reality (AR) or virtual reality (VR), their minds immediately fly to mobile apps like Snapchat lenses or gaming applications. Devices like the Oculus Rift have eased the public into the idea of using virtual reality technology. In fact, the global augmented and virtual reality market is predicted to reach $571.42 billion by 2025, according to Allied Market Research.

But AR and VR aren’t just for entertainment; they also have significant implications for business strategies. In the future, managers and company leadership will plan, prepare and integrate this technology into existing business goals.

However, even though we’ve had applications of both AR and VR in a few industries for more than 20 years, they are relatively new technologies in terms of mainstream acceptance. And there are still hurdles to be overcome in both developing the technology to create content and the devices to experience it.

While there is almost universal acceptance that AR/VR will have a profound effect across a wide range of industries within the next five years, many companies appear unsure about exactly where and how to join the party. The landscape of AR/VR is fast-moving and the major challenge for many companies will be finding the right partners to turn to for guidance as they navigate through this exciting and evolving new world.

What is Virtual Reality?

Essentially, VR uses computer-generated images to stimulate a different environment that the user can move around in. In VR, the user is completely surrounded by the digital world; no sign of the physical world remains.

Virtual reality technology is delivered via wearable devices — bands, headsets, earphones — and all the engagement is through a screen in front of a user’s eyes, which is powered by a computer, gaming console or mobile phone. Thanks to specialized software, sensors and 3D audio, the experience becomes a person’s reality, filling their vision, and the end effect is the ability for a user to interact with the artificial world in an intuitive way. When a VR user looks around, their view of that world adjusts the same way it would if they were looking or moving in real reality.

The beauty of VR technology is that the infrastructure ecosystems, development platforms and the devices which allow people to experience VR are already in place, and businesses are already adopting it for a variety of applications.

What is Augmented Reality?

Like VR, AR is often (though not always) delivered through a sensor-packed wearable device. However, that is the extent of their similarities. AR layers digital information and/or data on top of a user’s view of the real world. It might be something as simple as text notifications or Internet search information delivered through a wearable device or as complex as delivering personalized marketing content to consumers through sensors to a smartphone. An important element of AR technology is that it can travel with the user through a device or deliver content in a way that it leaves the user’s hands free for other tasks.

Companies are using spatial computing to seamlessly blend digital content into the physical world. This technology can be used to show items viewed online while shopping at a physical store, upskill workers at a faster pace or superimpose directions and guidance while exploring a new city.

However, market adaptation of AR is a little different than VR at this point, mainly because there are not too many AR devices on the market. AR is extremely complex and currently the price point is high. Ecosystems around AR-VR are not yet mature. Companies are still facing implementation issues and there’s not enough expertise in the market yet to provide the kind of services required on a large scale.

Technology novices may be tempted to use “augmented reality” and “virtual reality” interchangeably. After all, both provide the ability for companies to present data in a creative and immersive environment and develop new ways of interacting with users. But they accomplish this in different ways, thereby offering different opportunities. So…what’s the difference between augmented and virtual reality?

In short, AR keeps the real world central, but it overlays it with digital details. For instance, automotive companies use AR for 3D modeling, which helps them in the design process. Furthermore, retailers are leveraging AR to allow shoppers to virtually try out their goods before buying. For instance, consumers can see what clothes would look like on them or how furniture would fit into their homes.

On the other hand, the VR headset completely immerses the user in a digitally created world in which the user can only interact with virtual objects. It is meant to make the user feel that they are in an entirely different space. This makes it ideal for training employees by placing them in various situations or creating prototypes.

Both of these are different from mixed reality. In mixed reality, users are completely immersed in a virtual environment, but they manipulate objects in the physical world. It is the middle ground between the real world-centrality of AR and the immersive technology of VR. Although it is worth mentioning because of its relationship to augmented and virtual reality, I will not be delving into the logistics and applications of mixed reality in this article.

The differences between these two technologies blur as they become more sophisticated, but they still work in different ways and serve different functions.

How Augmented and Virtual Reality Can Support Business Goals

AR/VR is not new technology. Unfortunately, due to the high price points and the complexity of the technologies, they are not well-integrated into the commercial world. But that is changing — dramatically.

Now, more than ever, product companies in every industry must reframe how they design and create products, market and manage their supply chains. What are they doing to prepare for AR/VR? What are the barriers? And what are the expectations of the people in the trenches making day-to-day decisions about AR/VR adoption?

Jabil sponsored a survey of more than 200 team managers and executives with responsibility for AR/VR decisions at companies that design, market and/or produce manufactured products in industries such as consumer electronics, retail, entertainment and healthcare. We created our Augmented and Virtual Reality Trends Survey to better understand the experiences, challenges and trends brands are facing during their AR/VR adoption journey. Download the full survey.

AR and VR just might become the next great technologies, but the AR/VR market is still in its infancy. As a result, companies hesitate to commit resources to planning and investing in AR/VR.

In fact, the uncertainty is reflected by the fact that only 29% of respondents say that their company has a plan or framework at some stage of development and a mere 7% of those companies are executing on their plans today. As is often the case with new technology, there is a lot of hype surrounding AR/VR, and it appears that many companies are willing to let things play out and wait for the future to come to them. 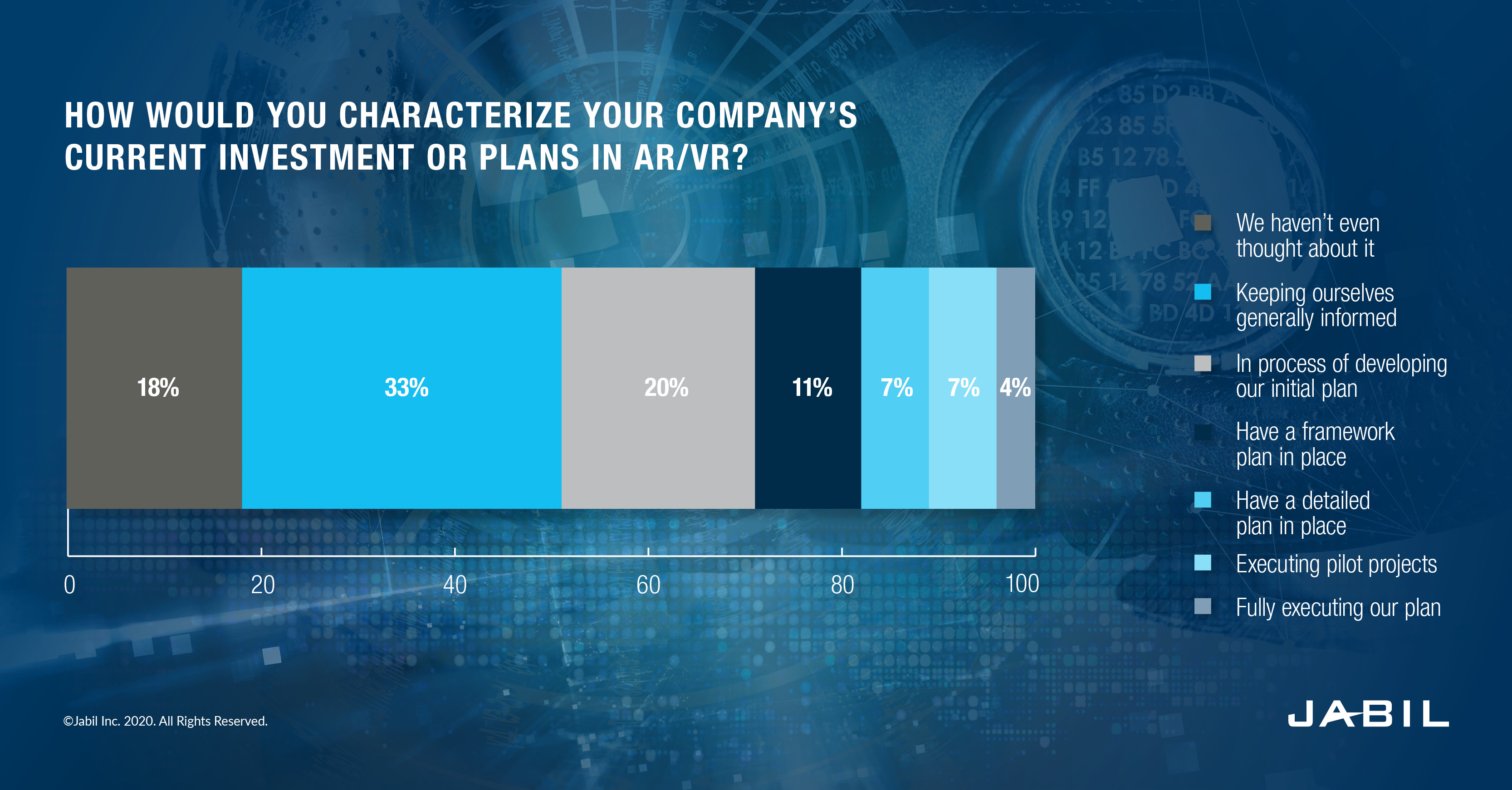 Another reason companies are hesitating is the lack of clear, general consensus as to whether business application or consumer use will become the driving force behind widespread adoption of AR/VR technologies. Sixty percent of respondents believe consumer use will lead to greater acceptance, while 40% think it will be business or enterprise use. In both cases, it seems respondents on both sides of the aisle are waiting for the next great app -- the Uber, Square or Duolingo of AR/VR -- that will incorporate everything a typical user might be looking for and deliver value based on what the user needs. 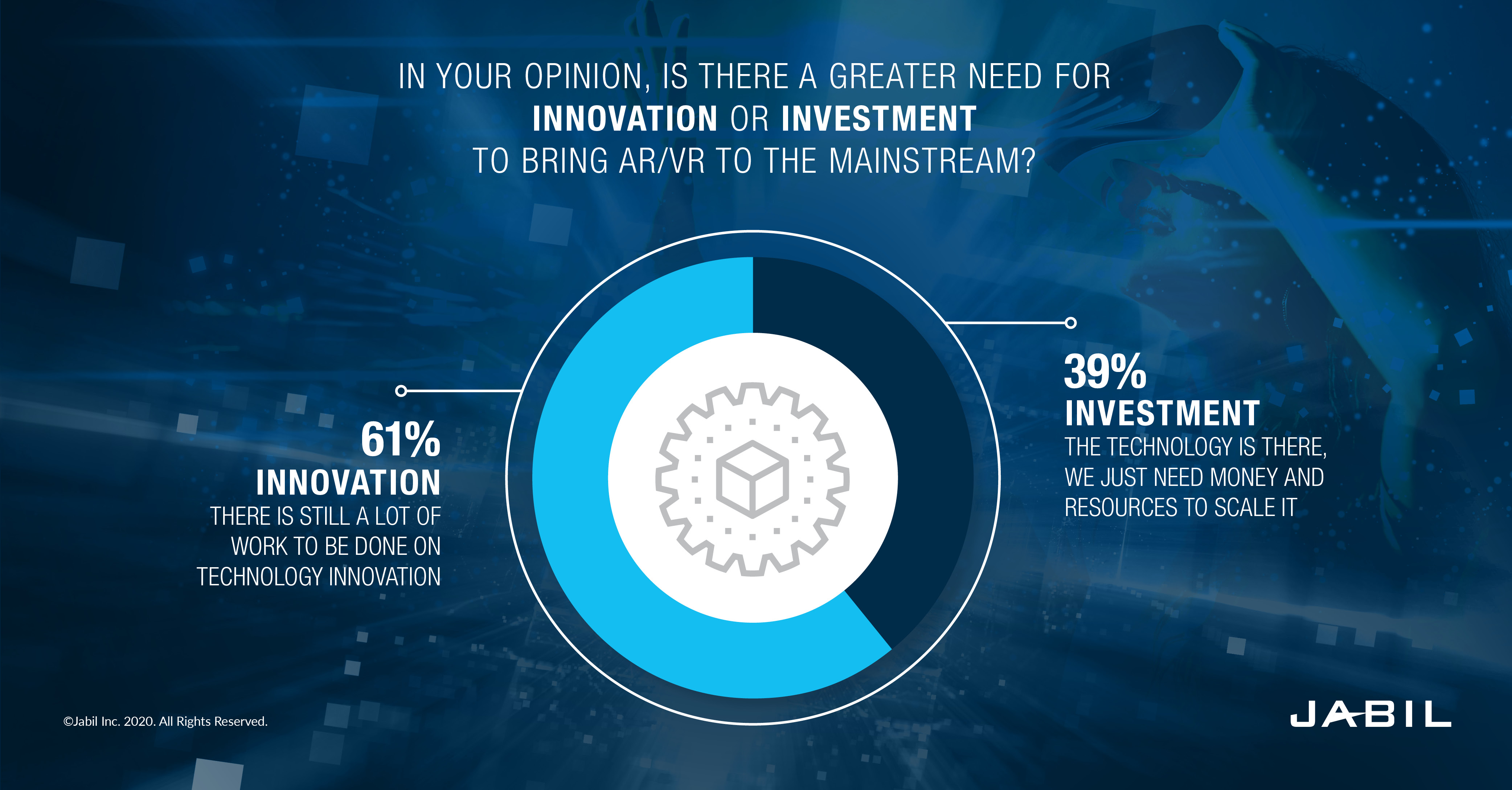 How exactly will the AR/VR impact our lives? Will it be in a fixed environment, like the holodeck presented in Star Trek: Next Generation? Or will the experience be projected through a wearable device, like in The Matrix? In fact, when questioned about where the evolution of AR/VR is leading and what they expected the typical AR/VR experience to most be like in 20-25 years, just less than half predicted a Minority Report-style augmented reality. In that film, Tom Cruise's character investigates a crime using many holographic computer screens, controlled by simple hand motions. He is able to call up and manipulate information using a gesture-tracking device, in his case a glove using motion sensors. As is often the case, fiction is the forerunner of the future.

It seems respondents on both sides of the aisle are waiting for the next great app - the Uber, Square or Duolingo of AR/VR - that will incorporate everything a typical user might be looking for, and deliver value based on what the user needs

Respondents also appear to agree that greater innovation and investment are still needed in the technology before the impact of AR/VR will be felt. Just over 60% of respondents believe there is a need for greater innovation and investment in AR/VR technologies and devices before wider acceptance can occur. Again, this is not surprising. There is typically a lag between concept and application with new technologies, and AR/VR is no different. Even when the applications are out there, they haven’t caught the attention of the mainstream, and businesses have not been able to seize upon the tremendous market opportunity that AR/VR promises.

Where should that innovation and investment occur? Just over 60% of the respondents say that technology innovation is needed to create the content that will be delivered through AR/VR devices. And while almost 40% reported that further innovation is required in the AR/VR devices currently coming to market, a large majority believes companies should invest heavily in products that deliver content. 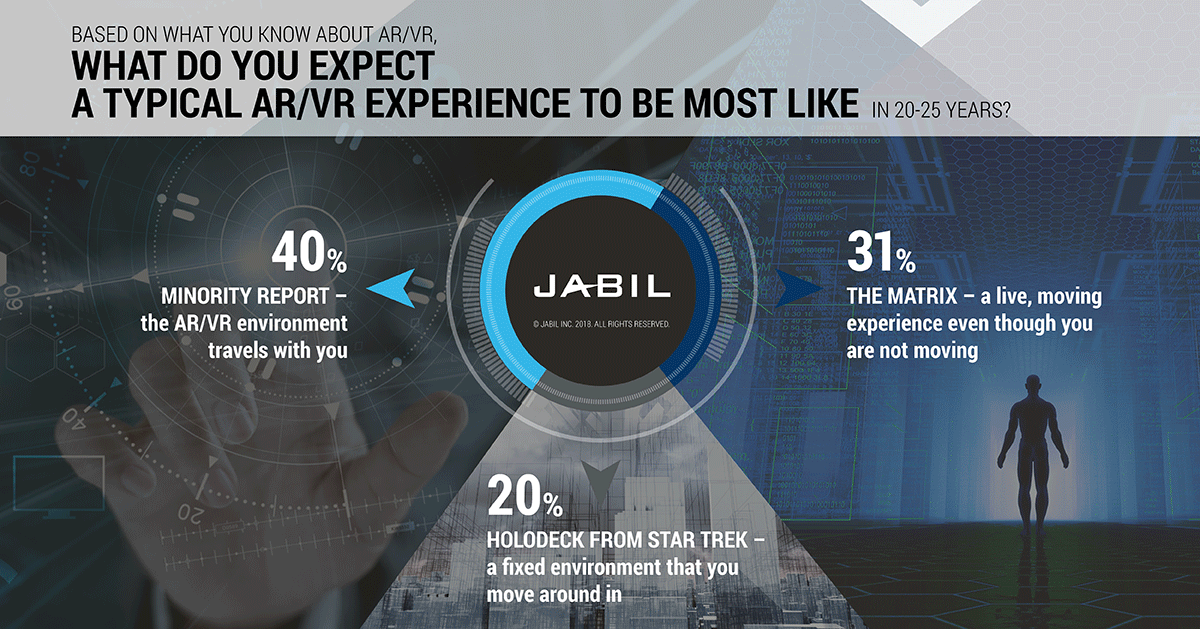 Stakeholders Are Keeping Their Options Open with AR/VR

Without a killer app to generate the next “must have” device or service on the market or even a consensus on just what industries AR/VR technologies will revolutionize, it is understandable that companies are waiting and watching as developments unfold.

As a result, the overriding consensus appears that companies value adaptability over setting a hard course in terms of AR/VR planning. Almost 100% of respondents from companies with existing plans say those plans are flexible and just under 70% of those companies report that they fully expect current plans to change in reaction to the extremely fluid AR/VR market. Even more indicative of the uncertainty for many companies is the survey’s finding that 82% of respondents expect that the innovations in AR/VR will occur so quickly that the ideal approach is to figure things out as they happen and remain open to rapid adaption to meet the opportunities that will arise.

AR/VR Challenges Will be Overcome Soon

If there is any consensus regarding the future of AR/VR, it is that there is still work to do before augmented and virtual reality technologies gain general adoption and acceptance.

On the device and delivery side, 99% of respondents believe that innovation in AR/VR must meet the challenges presented by the high cost of manufacturing, limitations with AR/VR specific devices and consumer technology limitations before gaining widespread acceptance.  In terms of content creation, 97% of participants see the major challenges being high content expenses, limited hardware and inadequate software.

Despite these challenges, confidence is high that through innovation and investment, the potential promised by AR/VR is on the near horizon. More than two-thirds expect AR/VR to become mainstream within the next five years, and a small contingent of believers say that AR/VR is already an accepted feature of modern life. Regardless, this technology is ready to make a big impact on life – and business – as we know it.