What is the Future of Augmented and Virtual Reality Technology?

The history of augmented reality (AR) and virtual reality (VR) technology goes back to 1838, when Charles Wheatstone created his stereoscope, which superimposed an image over each of the user’s eyes, thus creating a distant 3D image. Over the years, Edwin Link’s flight simulator, Morton Heilig’s telesphere mask, Ivan Sutherland’s “Sword of Damocles” VR headset and many more inventions contributed to the cutting-edge technology we recognize today. Of course, the future of VR and AR will make our current technology look as primitive as the early experimentations.

Due to extremely high development costs, the complexities of AR/VR devices and other challenges, these technologies are still tiptoe-ing into the commercial world, but early adoption has arrived. So, how close are we to mass adoption?

In Jabil's Augmented and Virtual Reality Technology Trends Survey, technology and business stakeholders indicated that consumer use of AR/VR will see adoption first. Most importantly, almost 70% of respondents believe AR/VR will become mainstream within five years. 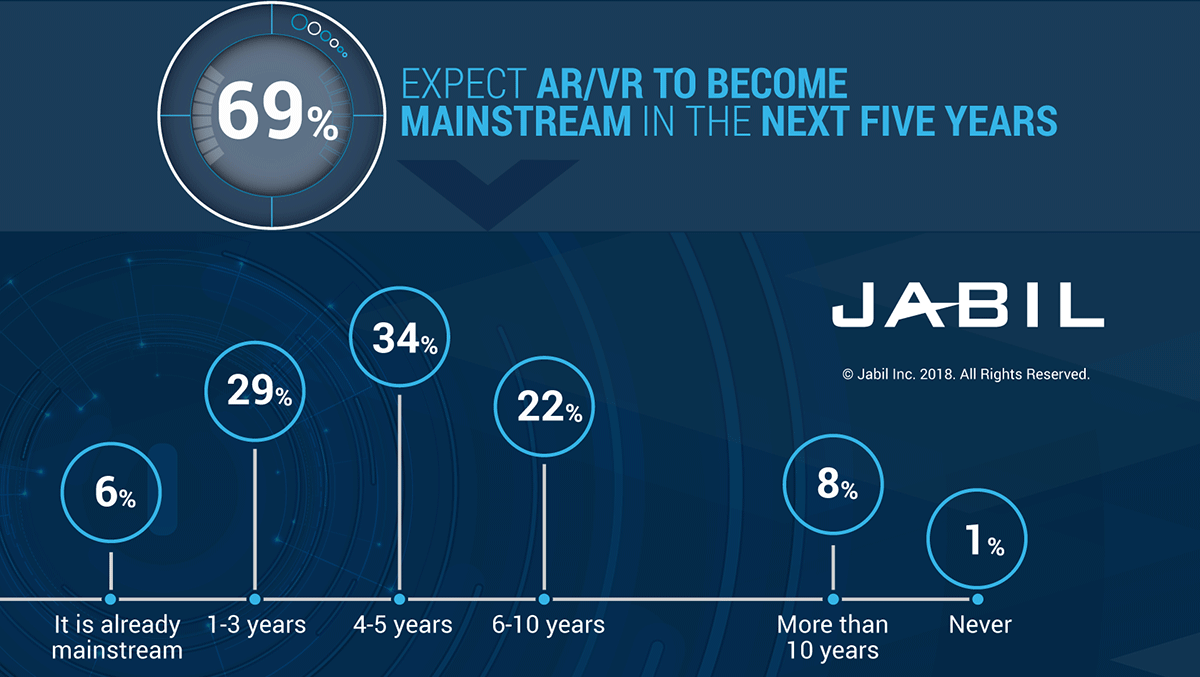 Augmented and Virtual Reality Technology: Where Are We Now?

More than a decade ago, the first real smartphone hit the market and made screens an essential ingredient of our lives. As a result, it has changed how we communicate, work, travel, purchase and more.

The first validation of consumer augmented reality use came from the explosively popular AR app Pokémon Go. Before then, nobody had thought about AR experiences or applications on a smartphone. This unexpected use of mobile AR successfully validated the consumer mass adoption of augmented reality.

Since Pokémon Go's initial launch in 2016, new smartphone implementations have been unveiled. While companies like Snapchat and Facebook have found entertaining ways to deliver AR experiences on social media platforms, retailers have developed AR apps to assist customers with online purchasing decisions. For example, the Ikea app gives consumers the ability to visualize furniture in their own home, simply by holding up their smartphone in a room or area. This helps alleviate part of the fear consumers experience when shopping online for big items, such as furniture. It provides an added convenience.

Smartphones, coupled with headsets, have been the most common use of delivering a VR experience for a few years now. This has been the most accessible entry-point for consumer VR use. Virtual reality is a lot more mature than the existing augmented reality market. The required software tools and hardware platforms to create an immersive VR experience are already available. With the availability of more advanced systems such as the Oculus Rift, coupled with 360 cameras, virtual reality experiences are quickly finding new avenues into our lives.

Virtual reality is showing some effective industry use-cases as well, from real estate applications to tourism. On a recent trip to Israel, I witnessed the Jerusalem Visitor’s Bureau using VR to immerse tourists in how the city looked 5,000 years ago. These types of innovative VR experiences are unveiling in industries worldwide.

Although augmented reality is less mature than virtual reality due to the limitations of AR technology, lack of standardization and a higher price tag, it is already being utilized in industries including manufacturing, healthcare and logistics. Augmented reality experiences are typically delivered through headsets, such as Meta, ODG, Vuzix and HoloLens, and are showing early signs that the technology is set to transform commercial and industrial markets. However, there is still work to be done before these technologies can reach mainstream adoption.

What is the Future of VR and AR?

As we discussed earlier, there are numerous AR/VR devices on the market, including headsets, tablets, smartphones, wearables and consoles. Each AR/VR device provides a different level of experience across the reality spectrum but also has specific limitations.

Many of the virtual reality headsets rely on smartphones to display the content. While these devices are a good introduction to VR, they lack the visual quality to deliver an immersive experience. Headsets tend to be bulky as well, making prolonged usage unlikely.

What is the future of our devices? How are they set to evolve with augmented and virtual reality? What if we could see through the screens we are surrounded by every day?

I think augmented and virtual reality technologies will consolidate and come in two forms in the future: tethered systems and standalone units. Tethered systems will be comprised of a unit or wearable on the head, with a wire attached to a processing unit. Standalone units will house all systems—from display to processing—within the unit and be available as a wearable. We're already seeing early signs of these trends as manufacturers choose a mixture between standalone and tethered units. Although some standalone units are already available, these devices are more complex and difficult to implement.

Today, we're in a state of compromise with augmented and virtual reality devices. None of the existing systems give users a complete, boundless and immersive experience. Most of the systems lack a natural, wide field of view (FOV), have limited display resolution, low brightness, a short battery life and lacking 3D sensing capabilities. It will be another three to five years before we will experience true, unconstrained AR/VR applications.

Pokémon Go gave the public a taste of mobile AR. But that was just the tip of what is possible. As extended reality capabilities and market growth increase, how will smartphones and other electronic devices evolve with augmented and virtual reality?

The AR/VR devices of the future will provide personalized, accessible and well-designed experiences. As these elements take hold, a platform shift is imminent. In my opinion, in three years we are going to see new AR glasses with LTE capabilities that will become an alternative to the smartphone. With improved immersive technology and AR capabilities, the form factor of our favorite consumer electronics will change and we'll never look back. In the next few years, we may be using augmented reality technology to check our text messages and smart glasses to scroll through Instagram.

How are Companies Planning for the Future of VR and AR?

Although we have an idea of where the augmented and virtual reality market is headed, product companies generally seem sheepish in developing their plans. Jabil's survey shows that 51% haven't even started developing an initial plan. Out of those with AR/VR plans or investments, 99% say their plans are flexible to change with the market.

Given the volatility of the AR/VR market thus far, some companies may be waiting to act. To successfully conquer the challenges involved with building out augmented and virtual reality technologies while keeping up with market expectations and time-to-market, companies may want to consider partnering with experienced vendors who can provide end-to-end product development with comprehensive engineering capabilities. Almost 90% of companies already expect vendors to help meet AR/VR requirements—from developing plans to full manufacturing capabilities. By leveraging outside AR/VR talent and technology, companies can focus on their core strengths while also delivering an out-of-this-world, immersive experience.