USA Today declared 2015 the year of wearable healthcare technology. The Huffington Post, Forbes and other media outlets made the same claim about 2014. Publications across the world buzzed with excitement over the upcoming healthcare revolution made possible by wearable healthcare technology: remote patient monitoring, early detection of medical conditions and value- over volume-based healthcare. Experts predicted a shift in the wearable device from being used primarily to track steps to monitoring medical conditions and improving overall health.

Devices like the Apple Watch have boomed in popularity. According to Apple, the watch can generate an ECG similar to a single-lead electrocardiogram, with the ability to recognize signs of atrial fibrillation – a serious form of irregular heart rhythm – or sinus rhythm, which is a normal heartbeat. It is also equipped with fall detection, emergency SOS, athletic training and an app that guides users through a series of calming breathing exercises. 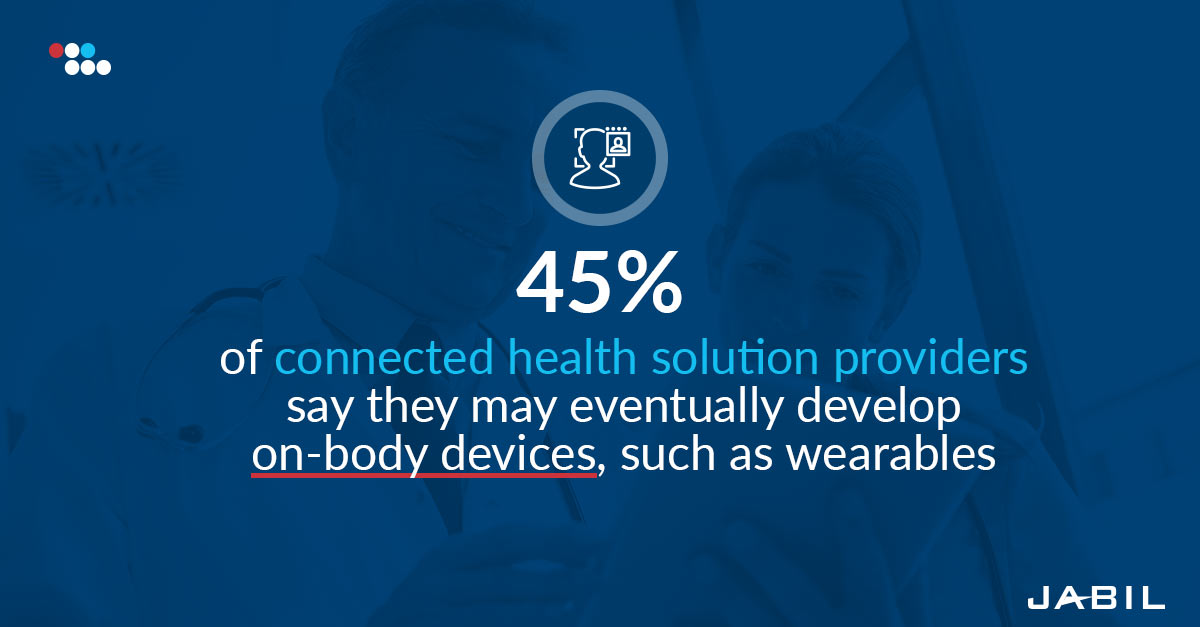 But what does the future of wearable healthcare technology looks like, and what is preventing it from getting there?

The Future of Wearable Healthcare Technology

The potential applications of wearables are plentiful and diverse. Thanks to progress in miniaturization, smart devices can be weaved into clothing, implanted in shoes or concealed in someone’s ear and can be used to track comprehensive data with increasing accuracy. The smaller the device, the smaller the transistors, meaning that these products require less power, a disruptive and driving factor in the current market. So, what are the most promising opportunities within the wearables market?

One of the biggest potential benefits is remote patient monitoring. Wearable devices are shifting from counting steps to monitoring physical health, reporting crucial statistics to medical professionals, such as blood pressure readings and possible arrhythmias. With accurate readings on body temperature and heart health, these devices could eventually replace everything from electrocardiograph (ECG) devices to defibrillators.

Remote monitoring will give patients more control over their own lives and health. For people with chronic medical conditions, it could reduce the number of hospitalizations or expensive treatments. But wearable devices won’t just help monitor chronic conditions; they can prevent them from developing in the first place.

Twenty-two percent of Jabil’s survey participants agreed that the biggest opportunity for connected health to make a difference will be the detection of medical conditions or symptoms of illness. Wearables can act as a conductor for this method of preventative healthcare. For example, Cyrcadia Health has been working with Nypro to develop a bra that can detect breast cancer. The goal is to provide users with early diagnosis of breast cancer, the leading cause of cancer death in women.

This piece of healthcare technology indicates another change in wearables: a shift from wrist-worn devices to body-worn. Arguable, condition-specific smart clothing is more convenient, comfortable, washable, durable and reliable than smart watches. Researchers have experimented with smart socks to prevent potential dire effects of diabetes, socks that measure a baby’s oxygen level and heart rate, and sports bras that detect heart rate and breathing. Some of these devices have sensors woven into the fabric; others are supplied with “snap on” technology.

Additionally, these capabilities are expanding from accessories and clothing to patches and conductive inks and tattoos. For instance, researchers at Harvard and MIT are working to perfect a biosensitive tattoo ink that will change colors if the person is dehydrated or experiencing off-nominal blood sugar levels.

As diverse as the types of wearable devices and how they are worn is the conditions they can treat. For example, wearables can also ease chronic pain. Neurology is one of the fastest growing segments in the medical wearables market as it can provide non-medicated pain relief. Per Frost and Sullivan, approximately 100 million Americans suffer from chronic pain, which come with additional burden: the high costs of treatment and medication. Using prescription pain medications can be dangerous in the long-term, but wearable technologies are becoming a safer alternative in treating chronic pain. Neurometrix and Recovery Force are just some companies that are already leading the market with innovative solutions.

Currently, the Michael J. Fox Foundation is partnering with Verily Life Sciences to give Verily Study Watches to more than 800 U.S. participants in the Parkinson’s Progression Markers Initiative (PPMI). The PPMI is a landmark study launched in 2010 to find biomarkers, disease indicators that are critical missing links in the search for better Parkinson’s disease treatments. According to the foundation’s website, the multi-sensor investigational Study Watch will collect data on movement and various physiologic and environmental measures nearly all day, every day. Verily and PPMI will offer this information to qualified researchers across the world to encourage independent studies and improve Parkinson’s therapeutic development.

Researchers are also experimenting with wearable technology to detect early signs of Alzheimer’s. These healthcare wearables will analyze several biological signs, such as sleep, balance and heart rate, as well as potential changes in speech patterns. “The study is a good start to see how these digital technologies can track changes by teasing out different subtypes and improving predictions,” Rhoda Au, a neuropsychologist and professor at Boston University, told Health Tech magazine. “Catching it [early] enough with this technology could expand capacity to find changes in the normal realm for interventions.”

In the future, people prone to motion sickness may find relief in wearables instead of medication. Utilizing their expertise in neurology, Reliefband partnered with Nypro and Radius to develop a wearable device to fight against nausea. The medical-grade wristband provides relief to those who suffer from nausea caused by motion sickness, chemotherapy or even virtual reality gaming.

Wearables can be used to measure glucose levels without drawing blood, take accurate biometrics from a device that fits in your ear and end the use of antidepressants with a headband. Their potential is staggering, and their applications in a variety of fields and industries are only growing.

Wearable healthcare technology and remote patient monitoring come in handy with military personnel, police officers, firefighters and others who are in similar emergency occupations, too. Uniforms can be built with wearable technologies built in, allowing them to adapt to the environments (by monitoring changing temperatures or measuring activity levels) and provide relief as needed.

Wearables are also poised to revolutionize the sports industry. During the Golden State Warriors’ dominant 2015 season, the team started using wearable devices made by Catapult Sports, a miniature device that aims to reduce the amount of injuries in high-intensity sports.

A little over halfway through the taxing 84-game season, head coach Steve Kerr benched the team’s four star players. As the complaints from fans thundered in, Kerr explained that the players’ feedback as well as data collected from the wearables indicated that they needed a break. These on-body devices gave the coaching staff the insight they needed to secure the NBA championship.

Since then, Catapult has been steadily circulating throughout sports leagues. It has now been adopted by approximately one third of NBA teams, half of NFL teams and 30 major college programs.

Mounir Zok, director of technology and innovation for the U.S. Olympic Committee, attributes wearable technology as being an integral component of Team USA’s success at the 2016 summer Olympics in Rio de Janeiro, Brazil. The U.S. took home 121 medals, 18 more than the previous competition in London.

Zok said that wearables have helped take athletes outside the lab, allowing them to be monitored in their natural environment, which has radically escalated both the applicability and amount of data.

All this sounds great, right? So, what’s stopping wearable health devices from progressing?

Unlocking the Potential of Healthcare Wearables

In Jabil’s survey, 51 percent of respondents answered that connected healthcare lags other industries because it is complicated to get both doctors and patients to adopt a new device, and 30 percent stated that the healthcare industry has a culture of being slow to adopt any new technology. Some of the responsibility for slow adoption also rests on the payer, who may hesitate before investing their hard-earned money on a device. Furthermore, if codes are not created for coverage on any specific new device, user adoption will dawdle or simply not exist.

These statistics and issues are reflected in the struggle for adoption of wearable health devices for reasons other than personal fitness tracking. 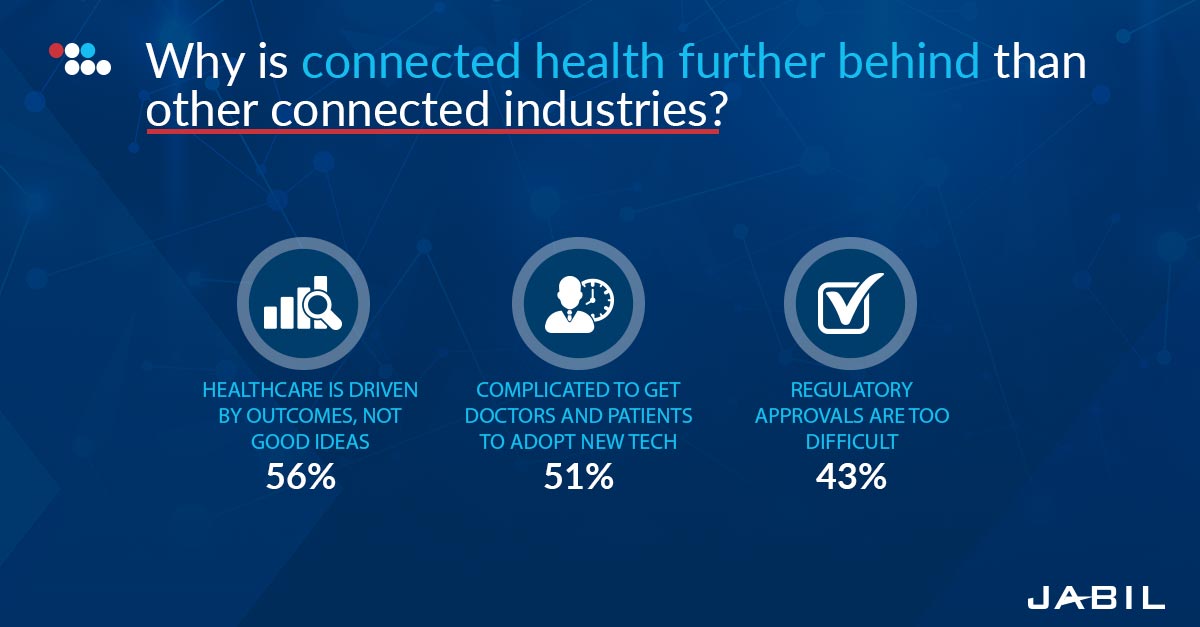 There are several reasons that the widespread adoption of wearable health devices has been slow. One issue has been designing a product that remains close enough to the body to glean accurate data without causing discomfort. While wrist-worn fitness trackers can be both comfortable and stylish, they are not always accurate. In 2016, a cardiac surgeon at Cleveland Clinic authored a study that found that even although some wrist-worn fitness trackers were fairly accurate in monitoring heart rate, none were as efficient as a chest strap.

Although a degree of inaccuracy may be tolerable when it comes to counting steps, if someone is relying on a device to track vital statistics or a doctor needs information to properly diagnose or treat, incorrect or incomplete data can be a matter of life or death.

Additionally, even if users do adopt a wearable health device, people frequently discontinue use of the device. After a while, the novelty wears off, and people lose interest or get tired of the buzz on their wrist every hour reminding them to take 250 steps. The abandonment rate for fitness trackers is 30 percent. Some companies have sought to solve this issue by incentivizing frequent usage. For example, customers of UnitedHealthcare using Fitbit’s $150 Fitbit Charge 2, a wrist-worn fitness tracker, can get credits worth up to $1,500.

Currently, only 8 percent of employee-sponsored wellness plans provide fitness-tracking bands for employees, but healthcare wearables are still an integral part of many corporate health initiatives. In December 2017, Glassdoor estimated that 13 million wearable activity-tracking devices will be integrated into Workplace Wellness Programs in 2018, a dramatic increase from 200,000 just a few years ago.

As the value of wearable health devices increases, this problem will naturally decrease, at least to some extent. Someone in fairly good shape is more likely to abandon a watch that tracks their steps than a someone at risk of heart attack is to eschew a device that monitors their heart rate. But healthcare manufacturers still need to ensure that their devices offer a degree of comfort while being worn.

While development and adoption continue to pose challenges for healthcare wearables, this technology possesses outstanding potential to revolutionize the industry, improving the way that patients and doctors interact, create a proactive approach to healthcare and allow patients to take better control of their own well-being.