The Value of Mentorship: The Mentee

When I graduated high school and began my college career, I had one goal in mind: I would not become an engineer. Now, I have a Bachelor’s of Science in Biomedical Engineering from San Jose State University. Like most things in life, we form plans in one direction only to find life leading us in another, but I believe we’re better for it in the end. My initial perception of being an engineer meant sitting in a cubicle, experiencing the monotony of staring at a computer all day, only to drag the computer home and continue the cycle. I’m happy to report I was completely wrong with this initial perception.

The turning point for me was the exploration of what engineering really was my first year in college at University of California, Santa Cruz. In my environmental studies class, I noticed that many of the problems biologists and environmentalists were facing were being solved by engineers, which sparked a curiosity in me. Once I gained some exposure and insight in the field, I decided to fully pursue a career path in engineering and transferred to San Jose State University. That was where I was really able to blossom as a student and, through the guidance and help of my mentors, made the decision to become a biomedical engineer.

During my transition from the University of California, I found myself losing my sense of direction. By the time I started at San Jose State University, I was debating a transition from civil engineering to biomedical engineering. I planned every detail for both paths, in fear for the worst-case scenario that I would be denied entry into biomedical engineering. When I was most terrified of not having a secure future and afraid of being a failure, a mentor appeared, unbeknownst to him. At orientation, Dr. Guna Selvaduray, the current Biomedical, Chemical, and Materials Engineering Department Chair, took extra time to stay after the orientation to speak with me about my plans to transition majors. The answer to all my problems was simple according to him: believe wholeheartedly in what you want to do, if you have already achieved it in your mind, success in reality will follow suit. After that, I was suddenly feeling extremely confident in this major life decision and ready to solely pursue biomedical engineering. The insights and reassurance he offered me, whether he knows it or not, was exactly what I needed to hear at that precise moment of my life.

Without Dr. Guna Selvaduray, I would not have found my way to Jabil. It was through his encouragement and collaboration with Jabil that I could complete my senior project here at the Blue Sky facility in San Jose, which opened many doors of opportunity. Dr. Selvaduray not only influenced my career choice but also encouraged me to fiercely pursue it. Once I was introduced to Jabil at the start of senior project, my new source of guidance really came from Quyen Chu, director of engineering services. He helped me believe in my abilities, that a successful engineer did not come out of textbook intelligence but from characteristics of being a team player, seeking knowledge in all areas and leveraging resources. He encouraged me to pursue experience in subjects I am not familiar with while still allowing me the opportunity to dive deep into what I am passionate about.

I truly believe that there is something to learn from everyone’s experiences, especially those who have struggled through similar situations as yourself. These mentors’ “lessons learned” are your warning signs, your words of wisdom and your personal guide. From my experiences, it wasn’t so much about looking for a mentor as much as it was that my mentors came to me when I needed help the most. Before jump-starting my career, I was looking for validation that I was on the right path, feeling unsure of myself and my abilities, and my mentors picked up on that. They were able to show me how to accept my own unique journey through my college career, which was something that originally gave me a lot of insecurity.

Feeling more secure and confident in my knowledge-base, the mentors I seek now are those who can help me navigate my career path and create a healthy work-life balance. By finding someone who understands you as a person, you are able to learn how to best use your unique qualities to succeed in new and unexpected ways.

From Mentee to Mentor

This year, I have had the pleasure of guiding a group of San Jose State University senior project students through exactly what I had done a year prior, and I have learned a lot being on the other side of the fence. Being a mentor feels like you are finally able to give advice to your former self during all those times you were at crossroads in your life. It’s so rewarding to see the students grow and accomplish goals, which you helped them realize. I hope to impart my small wealth of knowledge on someone, passing on what my mentors provided me: the greatest push toward success. 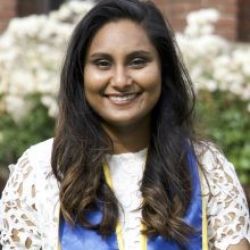